‘PROSTITUTIONAL’ CORRUPTION; THE MEDIA MUST ACT 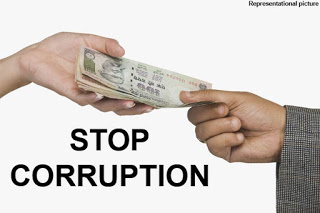 In a country where the media only move from one issue to another without actually following up the former to see justice done to them, leaders are given the opportunity to engage in what I call ‘prostitutional’ corruption.

‘Prostitutional’ corruption in the context of this article means to explain the unending yet unpunished corruption that engulfs Ghanaian politicians.

Just as a prostitute moves from one man to another every night, our leaders seem to move from one corrupt act to the other. How many leaders have actually been processed in court and sentenced to prison because of their corrupt acts but how many alleged corruption cases has this country seen? Why else would they perpetually perpetuate the act and defend themselves with such impunity?

If the media was angry enough, if the media was severe enough and not just do the routine ordinary daily reportages, but was well focused on seeing justice done by sticking to issues until they are resolved, things will definitely change.

From contract inflation to bribery, embezzlement, favouritism, nepotism and the many major and minor corruption pulling this poor country backwards, they go unresolved hence unpunished.

Since 1992, we have been alternating between the National Democratic Congress and the New Patriotic Party for political governance. Now, how many times have these two parties been fraught with allegations of corruption? Yet, we continue to vote them into power to rob us of the little resources we have.

If we are really doing this to ourselves, then I think we should stop blaming the white man for colonizing us.

How many majority sides in parliament have ever opposed a deal that has been taken to parliament by their executive arm of government? It is always the minority that sees something wrong with any deal, never the majority. Why must it be so? Are we so political that we forget those we are meant to serve?

Like I have said and will continue to say, the power vested in leaders is not for them but it is for the people because power emanates from the people. Chapter one clause one of the 1992 constitution states, “The sovereignty of Ghana resides in the people of Ghana in whose name and for whose welfare the powers of government are to be exercised in the manner and within the limits laid down in this constitution.” Unless I am wrong but this clause suggests that no government official takes any action in the capacity as mentioned unless it is in the interest of the people of Ghana.

Now, even before chapter one of the 1992 constitution of Ghana is its preamble which clearly defines why we the people vote every four years to establish a government. The first paragraph of the preamble states, “We the people of Ghana, IN EXERCISE of our natural and inalienable right to establish a framework of government which shall secure for ourselves and posterity the blessings of liberty, equality of opportunity and prosperity.” We exercise our natural rights to establish governments ideally to have them ensure our collective progress not just for the current generation but also for posterity but all we eventually get are extreme political biases and personal interests flying above our heads.

Will this cycle of abhorring deliberate actions and inactions of leaders aimed at amassing personal wealth and impoverishing this country ever end? Who will end it? Unless of course, we haven’t realized that most often than not, it is student leaders who ultimately end up as political leaders.

Now, it is an open secret that most of these student leaders have their own political affiliations hence being groomed by their party leaders whom seemingly are incompetently riding this country into the pit.

Not to say that the media hasn’t done anything substantial to help the growth of this country but it can do better. Indeed, radio stations like Joy 99.7 and Citi 97.3 FM have gone beyond just sitting in the studio and broadcasting the news. They have gone to the extent of organizing programs to educate the citizenry but these educational programs were for the literates. How about the illiterates?

There are too many illiterates in this country who no matter how much we talk of how swing voters eventually make the ultimate decision of who wins an election, also matter because their votes count.

Now, if they are left uneducated and making decisions based on ignorance and emotions, then this country is nowhere out of the woods yet.
No offence to any illiterate but the truth is without proper education, politicians will continue to buy our votes and use us the way they please.

A lot more needs to be done to ensure our leaders are not just doing cheap propaganda and jumping from one corrupt act to another just like prostitutes change men every night but instead performing their mandates to the maximum.

The media teaming up with civil society organizations to educate not just the literate but also the illiterate citizens on a variety of issues that can enhance their tendency to make appropriate political decisions, not just during elections will put our leaders on their toes.

Political leaders know the essence of information to the citizenry, why else would the Right to Information Bill spend twenty-two years and counting in parliament without getting passed into law.

‘Prostitutional’ corruption only happens because the citizens are not empowered with information, the leaders don’t seem to really respect the electorates and the media is not doing enough.

A better Ghana we all want, let us be responsible.