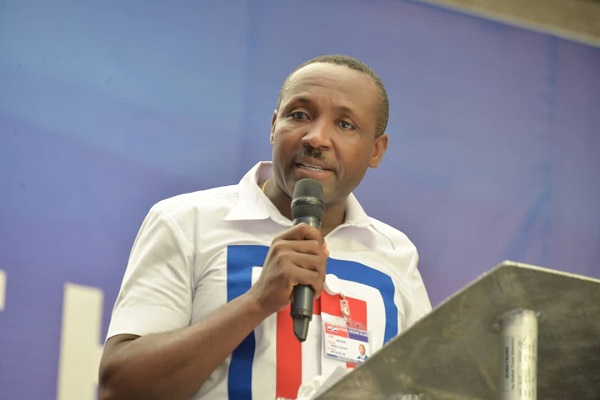 The New Patriotic Party (NPP) says President Akufo-Addo is currently leading the race for the presidency per their figures.

They said their independent collation of the election projects a 52.87% win for President Akufo-Addo while the National Democratic Congressâ€™ (NDC) flagbearer, John Dramani Mahama is trailing behind with 49.3% of the national votes.

The NDCâ€™s Director of Elections, Elvis Afriyie-Ankrah, in an earlier press conference insisted that its independent collation of results show that the stakes are high for the partyâ€™s flagbearer and parliamentary candidates.

Responding to such claims, the General Secretary of the NPP, John Boadu said Akufo-Addo is going to have a walkover in the presidential race.

â€œWe are happy to announce that from the results we have so far collated and vetted in our situation room in Accra from the scanned pink sheets we received from 34,000 polling stations nationwide, President Akufo-Addo is in an incontestable win. This represents 87.43% of all polling stationsâ€¦This puts the NPP candidate, Nana Addo Dankwa Akufo-Addo in the lead with 6,085,708 representing 52.87%. John Maham is number two with over 5 million votes representing 49.3%.â€

â€œWe can confidently say that Nana Akufo-Addo has polled an incontestable margin against John Mahama, but we will wait as responsible citizens for the EC to declare the final results,â€ John Boadu added.

â€œWe call on all well-meaning Ghanaians to exercise patience as we wait for the EC. We are confident of a second term in office and a majority in parliament.â€

Meanwhile, the NPP has rejected claims by the NDCâ€™s Director of Elections, Elvis Afriyie-Ankrah that his party has flipped 36 parliamentary seats occupied by the governing party.