Akufo-Addo congratulates Bagbin over his election as CPA President 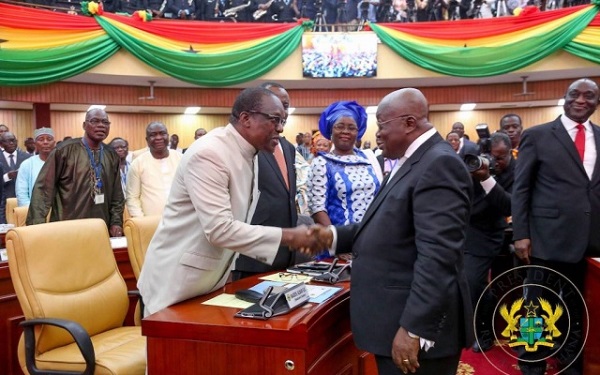 Akufo-Addo has congratulated Ghana’s Speaker of Parliament Alban Bagbin for his election into office as President of the Commonwealth Parliamentary Association International ( CPA).

In a tweet, Akufo-Addo praised Alban Bagbin, and the Majority Leader, Hon. Osei Kyei-Mensah-Bonsu for their victory in the recent Commonwealth Parliamentary Association International elections.

He called on them to work to advance the cause of Ghana and Africa within the Association.

It is a proud moment for Mother Ghana, and a deep appreciation of the strength and vibrancy of her democratic and parliamentary system.

As strong believers in the work of Parliament, I am hopeful that both of them will continue to work to advance the cause of Ghana and Africa within the Association, and help enhance the prospects of bringing progress and prosperity to our peoples in our time."

Last month, Speaker Bagbinn was unanimously elected the President of the CPA, an organization of over 180 member Parliaments of the commonwealth of nations, at the just-ended 65th Commonwealth Parliamentary Conference (CPC) hosted by Canada in Halifax.

Until his new appointment, Bagbin was the vice president of the CPA.

Founded in 1911, it is a membership association which brings together Members, irrespective of gender, race, religion or culture, who are united by community of interest, respect for the rule of law and individual rights and freedoms, and by the pursuit of the positive ideals of parliamentary democracy.

The Association is made up of over 180 legislatures (or Branches) divided up between nine geographic regions of the Commonwealth.

It offers a vast opportunity for Parliamentarians and parliamentary staff to collaborate on issues of mutual interest and to share good practice.