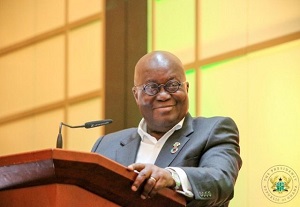 A staunch member of the National Democratic Congress (NDC) Dela Coffie has praised President Akufo-Addo for his decision to roll out the ‘Year of Return’ initiative.

Dela Coffie described the President as ‘smart thinking’ for taking the initiative a notch higher with the introduction of the ‘Beyond the Return’ initiative to build on the gains of the Year of Return.

He believes that President Akufo-Addo deserves commendation for his efforts as it has brought thousands of Africans in the diaspora and people of African descent to the country.

In a post on Facebook, Dela Coffie stated that: “President Akufo Addo deserves commendation for selling Brand GHANA to the world. He single-handedly declared 2019 as the ‘YEAR OF RETURN’ and got the entire African American community, folks with International standing and other global influencers trooping to the motherland 400 years after the slave trade''.

“And just as the curtain is about to be brought down on the ‘YEAR OF RETURN’, he has declared 2020 as ‘BEYOND THE RETURN (The Diaspora Dividend) just to carry on with the momentum and explore other investment opportunities.“This is smart thinking and I doff my hat to the President for such a great initiative!!”

President Akufo-Addo launched the initiative in the U.S. about 15 months ago and it has since attracted people like Jay Z, Beyonce, Steve Harvey, Rick Ross, members of US Congress among a host of other personalities and groups to the country.

The Beyond the Return initiative, recently launched by the President, is aimed at sustaining the relationship built through the about-ending Year of Return programme to ensure broader and mutually beneficial gains between the continent and diasporans.

President Akufo-Addo hopes to use the initiative to build a prosperous Africa, particularly, for the youth to keep them from embarking on dangerous journeys for greener pastures, mostly nonexistent, in Europe and the Americas.