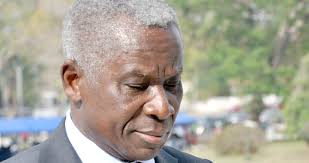 President-elect Nana Akufo-Addo on Wednesday announced the appointment at a press briefing at his Nima residence in Accra and also named Brigadier General Emmanuel Okyere and Joshua Kyeremeh as his National Security Adviser and Coordinator respectively.

According to Brigadier General Nunoo-Mensah who also served Chief of Defence Staff during his military career, the president-elect has appointed the right people for the job.

"I know Mr. Kan Dapaah very well, he is a very astute man and has the competence for the office he is going to head. Nana Akufo-Addo has made the right choice", he told Citi FM in an interview adding “I wish them well and I believe they will be able to serve and protect the nation well”.

Mr Kan Dapaah, a former MP for Afigya-Sekyere in the Ashanti Region, served as the Energy, Communications and Interior Minister under Kufuor.

He also had a stint a Minister of Defence before serving as Chairman of the Public Accounts Committee of Parliament between 2009 and 2013.