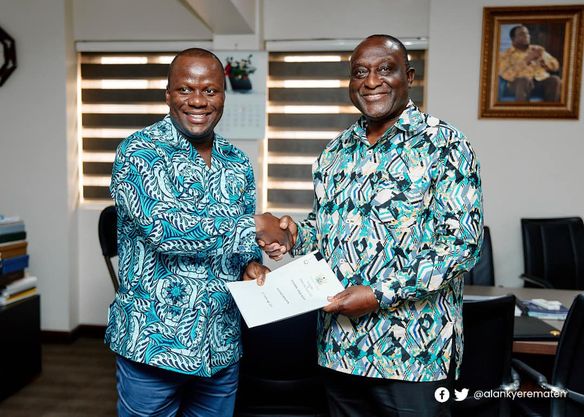 Former Minister of Trade and Industry, Alan Kyerematen has presented his handover notes to the caretaker Minister Samuel Abu Jinapor.

The handover ceremony took place in Accra on Monday, January 16.

This comes after Alex Kyerementen resigned as the Minister for Trade and Industry to pursue his political ambition.

READ ALSO: Alan Kyerematen thanks Akufo-Addo 'for the opportunity to serve'

"I had a successful handing over to the caretaker Minister, Hon. Samuel Abu Jinapor, who has been tasked by His Excellency the President to assume responsibility for the Ministry of Trade and Industry pending the appointment of a substantive replacement, he wrote on Facebook.

In the wake of this, President Akufo-Addo has tasked Samuel Abu Jinapor to assume responsibility for the Ministry of Trade and Industry with effect from Monday 16th January 2023 pending the appointment of a substantive replacement for the outgoing Minister Alan Kyerematen.

This was announced by the Director of Communications at the Presidency Mr Eugene Arhin in a statement on Friday, January 13.

Samuel Abu Jinapor is a politician, a dedicated member of the New Patriotic Party (NPP), and a qualified Barrister and Solicitor of the Supreme Court of Ghana.

He graduated from the Kwame Nkrumah University of Science and Technology, Kumasi, with a Bachelor of Science degree in Physics, and specialised in Biomedical Physics.

His intellectual thirst and political aspirations led him to enrol to be trained as a lawyer – a goal he accomplished successfully. Consequently, he was called to the Ghana Bar in 2012.

As a newly enrolled lawyer, he undertook his pupillage with the reputable Messrs. Kulendi @ Law, an Accra-based commercial and corporate law firm, from October 2012 to August 2013. He studied under the tutelage of the renowned lawyer, Yonny Kulendi, who is now a Justice of the Supreme Court of Ghana.

Within a relatively short period, Mr. Jinapor rose to the position of Senior Associate.

In this capacity, he developed the skills for quick thinking and oratory, and he served as an advocate in major commercial and corporate litigations. Whilst at the firm, Mr. Jinapor acted as a transactional lawyer for several complex, commercial negotiations, both domestically and internationally.

Again, as Senior Associate, he was periodically assigned to manage a team of lawyers from diverse backgrounds. Over the years, he had the rare opportunity of representing major foreign companies in Ghana as a Solicitor and Legal Advocate, both in Ghanaian Courts and Arbitral Tribunals.

Mr. Jinapor earned his Master’s Degree in Law (LL.M) in Alternative Dispute Resolution (ADR) from the Faculty of Law, University of Ghana, in May 2017. In the course of his studies, amongst others, he successfully took academic sessions in International Commercial Arbitration, Labour Law, Law and Society.

Mr. Jinapor is regarded as a highly motivated and dynamic, rising young politician. He is energetic, intelligent, resourceful, and he combines effective communication skills, with detailed legal knowledge, to dissect complex problems, and deliver satisfactory outcomes, whether working alone or as part of a larger team.

His interest in the country’s public affairs encouraged him to join politics in 2004, and he has since been a widely known and excellent Political Activist. His first foreign relations exposure came when, at an early age of twenty-three (23), he had the unusual opportunity to accompany the then President of the Republic, His Excellency John Agyekum Kufour, on his historic State Visit to the United Kingdom (UK) in 2007, as a Communications Aide, where he made appearances on shows of various media houses in the UK.

The watershed moment came, when in 2007, he was privileged and honoured to be appointed by Nana Addo Dankwa Akufo-Addo, then presidential aspirant of the New Patriotic Party, as his Campaign Aide in the 2007 NPP presidential primaries. This is a position he held in both the 2008 and 2012 general elections.

In the 2016 general elections, Mr. Jinapor played a major political advocacy role for the New Patriotic Party (NPP) and its presidential candidate, Akufo-Addo. He was seen and heard on major media and campaign platforms across the country, taking on the incumbent Mahama government, and promoting the policies of his Party, the NPP, a task he executed brilliantly with considerable courage and tenacity, earning him the admiration of many.

In 2017, President Akufo-Addo appointed him as Deputy Chief of Staff in charge of Operations at the Office of the President, at a very youthful age of thirty-three (33), the youngest in the history of Ghana to occupy such a position. As Deputy Chief of Staff, he assisted the Chief of Staff in mobilising government machinery to support the execution of the President’s agenda for the country. Having worked, closely, in various capacities with President Akufo-Addo, both in opposition and government, Mr. Jinapor has gained considerable experience in the workings of government.

In 2020, whilst still performing his demanding task as Deputy Chief of Staff, he contested the parliamentary seat of Damongo, the maternal hometown of former President John Dramani Mahama, the 2020 Presidential Candidate of the National Democratic Congress (NDC), and won that highly competitive election with a significant margin of victory.
He unseated the NDC’s two-term Member of Parliament and Ranking Member for Energy and Mines, Hon. Adam Mutawakilu. Since the creation of the Damongo Constituency in 2012, the NPP has never won the Presidential and Parliamentary elections.

Thus, the victory of Mr. Jinapor in this Constituency came as a big surprise to many political pundits and commentators. He has since been sworn in as a Member of the 8th Parliament of the 4th Republic.

In addition to his responsibilities as minister of Lands and Natural Resources, on 14th January, 2023, following the resignation of Mr. Alan Kyerematen, president Akufo-Addo appointed him as the caretaker minister responsible for Trade and Industry.

He is happily married to Mrs. Naada D. B. Jinapor, a Lawyer and head of the Corporate Law Department of the Social Security and National Insurance Trust (SSNIT) of Ghana. Their marriage is blessed with four (4) daughters.