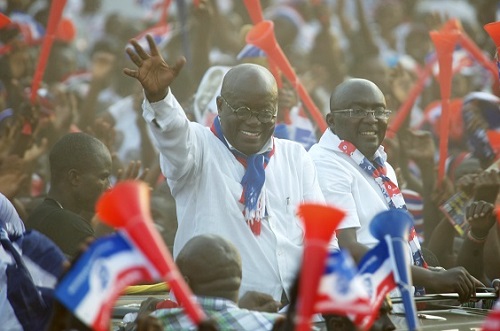 The New Patriotic Party (NPP) will wrap up their campaign today at the Ayawaso West Wuogon Constituency ahead of the by-election scheduled for Thursday, January 31, 2019.

The rally will see a host of party executives including President Akufo-Addo who is expected to address the people of the constituency as the NPP look to win the seat.

The rally is scheduled to start at 2:30 pm and President Akufo-Addo is expected to be present at the grounds at 4: pm.

The Ayawaso West Wuogo seat was occupied by the NPP but became vacant after Member of Parliament for the area Kyeremateng Agyarko passed on last November.

There are four candidates to contest the by-election, they are NPP's Lydia Alhassan, wife of late Emmanuel Agyarko Kyeremateng (former MP of Ayawaso West Wuogon), PPP's William Doworkpor, Delali Kwesi Brempong of the NDC and Clement Boadi of Liberal Party of Ghana (LPG).

The by-election could be a two-horse race between the NDC and the NPP. Both parties are very confident of a victory.

The Ayawaso West Wuogon looks to be a stronghold of the NPP but with the numerous campaigns the NDC have staged, it could be a close contest on Thursday January 31, 2019.