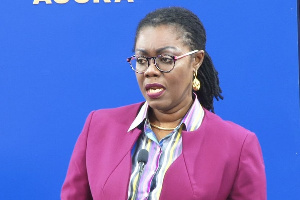 The Communications Minister, Mrs Ursula Owusu-Ekuful, has dismissed claims by former President John Dramani Mahama that the government's closuresÂ of some radio stations were politically motivated.

According to her, a lot of considerations took place prior to the closure of the radio stations that were affected therefore the closure was not a deliberate one by the Akufo Addo government.

The National Communications Authority, regulators of radiofrequency in Ghana, in May 2019 withdrew the licences of some radio stations including two pro-opposition radio stations; Radio Gold and Radio XYZ over violation of their licensure agreements.

The NCA's decision to shut down the stations was in accordance with the ruling of the Electronic Communications Tribunal.

The former President John Mahama said the government deliberately shut down opposition radio stations under the guise of sanitising the system.

Speaking at the Meet-the-Press Series in Accra on Monday, Mrs Owusu-Ekuful described the comments by Mr Mahama and the Media Foundation for West Africa as unfortunate

â€œA total of 144 stations were identified for various infractions of authorisation with 57 closed down in 2018 and 2019 following the decision of the communications tribunal out of which 30 have submitted fresh applications for radio authorisation.â€

â€œIt is factually incorrect and blatant for someone who should have known better like former president Mahama and the Media Foundation to say that only opposition radio stations were targeted for the closure using the law.

â€œI know of only two; Radio Gold and Radio XYZ which fall within the National Democratic Congress fold. Radio Gold had operated for 16 years without renewal of authorisation,â€ she said.

READ ALSO:NCA shut down our station during coverage of NDC Conference - Radio Gold

Also, the Information Minister Kojo Oppong Nkrumah described comments from former President John Mahama in relation to the closure of Radio Gold and Radio XYZ as â€œmischievousâ€ when radio stations were shut down in May this year.