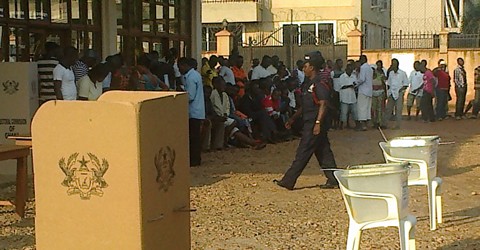 Police have arrested three persons at Asokore Mampong in the Ashanti Region in the ongoing district level elections for several infractions.

The three who were arrested had in their possession a copy of the voters' register. The incident according to Citi FM's report happened at Galilee Church B polling station in the Sawaba Denyasi electoral area.

The arrested persons have been taken to the Asokore Mampong police station for interrogation.

An agent of one of the aspirants who witnessed the incident said officers noticed the men when they were monitoring the process but when questioned they could not provide any reasonable explanation leading to their arrest.

"Security on the ground and later on the commander came with some members, when they got to the middle of the park they realised there was a booklet which contained the list of voters and two men were holding it, they were questioned but they were not part of the agents when they were been escorted another guy came that he gave them the job and he was also arrested."

Police to deal with anyone who attempts to jeopardize the security

Ghana Police Service yesterday indicated that they will deal with anyone whose conduct endangers the security of the district assembly's elections scheduled for tomorrow December 17, 2019.

The Police said they have put in measures in place and will give in their best to ensure the polls are properly secured.

District Commander of the Jamestown Police Station, Superintendent Michael Odame cautioned aspirants and electorates against any attempt to incite trouble in the various electoral areas.

''We as the police will ensure that the entire jurisdiction is properly patrolled and secured. We have sent a note of caution that whoever will want to foment trouble, we will let the laws of the country deal with that person. The police will ensure that anyone who tries to do anything including those who want to take the law into their own hands. We will ensure that such a thing does not happen. We want everybody to be law-abiding so that we have a peaceful election,” he said.