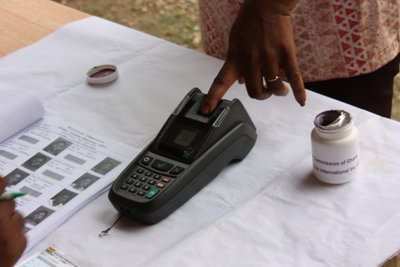 General Secretary of the opposition National Democratic Congress (NDC) and leading member of the Inter-Party Resistance Against the New Voter Register, Johnson Asiedu Nketia says the current system could be upgraded to have the facial recognition component the EC wants to add to the register.

As the date for the compilation of a new votersâ€™ register draws closer, the leadership of the Inter-Party Resistance Against the New Voter Register is insisting that claims that the Electoral Commissionâ€™s Biometric Voter Management System (BVMS) is obsolete are false.

The group claims that their checks with the manufacturers of the machine led them to such a conclusion.

Mr Asiedu Nketia addressing a press today quashed suggestions by the EC that the current system is obsolete.

â€œAlthough the computer operating systems and software of the current BVR need to be upgraded, components like the fingerprints and scanners were very robust and fit for use. The enrollment software can easily be upgraded with facial recognitionâ€¦The cost of upgrading the BVR equipment with new functionalities will be far cheaper than replacing them with new equipment,â€ he added.

Johnson Asiedu Nketia also said the April 18 date for the registration for a new voters register is not feasible.

â€œYou are now in the process of procurement. You are in March and so between today and 18th April you have to bring samples or prototypes of your equipment and go and do pilot registration, train everybody before you come and start registration. Unless you want to create confusion you will not be in the position to do the registration on the 18th April,â€ Asiedu Nketia argued.

However, Parliament has approved about GHS390 million for the EC to procure a new biometric system which has facial recognition technology and also compile a new votersâ€™ register ahead of the 2020 general elections.

Whereas some political parties backed the decision by the EC, others including the National Democratic Congress have resisted the move, claiming the decision is ill-timed and a waste of taxpayersâ€™ money.

Officials of the EC had insisted that the decision to compile a new register was agreed by the various political parties as they did not object to the proposal when it was tabled at Inter-Party Advisory Committee (IPAC) meeting on March 27, 2019.