Ghana and Nigeria need to resolve their differences as soon as possible - Prez. Akufo-Addo 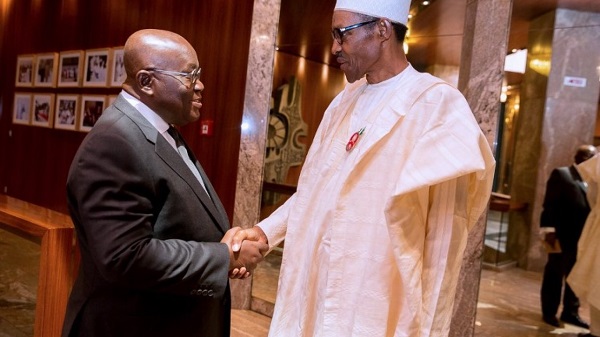 President Akufo-Addo has called on the leadership of Nigeria to sit with his government to solve all issues between the two countries.

Ghana and Nigeria for some time have had some issues mainly regarding the closure of the latter's border, trade issues where some Nigerian traders had their shops locked in Ghana among others.

President Akufo-Addo while addressing the outgoing Nigerian High Commissioner to Ghana, His Excellency, Olufemi Michael Abikoye, when he paid a courtesy call on him at the Jubilee House, to bid him farewell as he brings his two and half years tour of duty in Ghana to an end said it was important for the two countries to sit and resolve their differences.

“Some of the problems that you know about, we need to find a resolution to them as soon as possible. Trade and issues of the border, our own internal problems here with Nigerians involved in trading, these are matters that friends should be able to sit down and resolve and we hope that both of them are going to be resolved and brought to closure so that we can continue this social and economic development on an even and positive heel” President Akufo-Addo said.

Olufemi Michael Abikoye, the outgoing High Commissioner in his remarks indicated that throughout the two and a half years he has been in Ghana, his tour of duty has been characterized by one success story to the other. He indicated that within the first year of his stay, he was able to visit all sixteen regions in Ghana, as well as interacting with several Chiefs and People on the countryside and he will not forget the rich memories. He further noted that it is his wish and expectation that the already strong relations between Ghana and Nigeria will be strengthened even the more with his successor who assume office after his exit.

Two other Envoys were also at the Jubilee House to bid President Akufo-Addo farewell as their time of service to their nations comes to an end. They were the Indian High Commissioner to Ghana, Mr. Birender Singh Yadav, and the Guinean Ambassador to Ghana, Arafan Kabine Kaba. President Akufo-Addo congratulated them for a successful tour of duty here in Ghana and wished them well in their future assignments in their Diplomatic career.