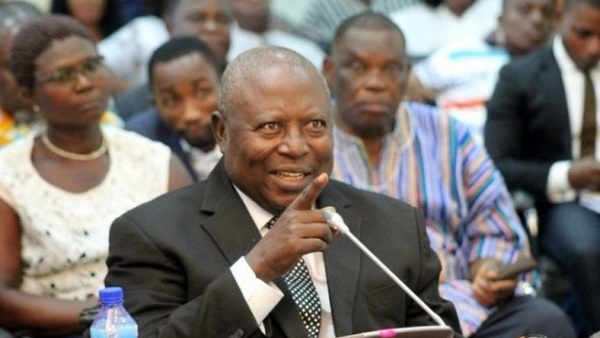 The General Secretary of the National Democratic Congress (NDC) Asiedu Nketia says Ghana is in a state of emergency due to COVID-19 but the Special Prosecutor Martin Amidu is brewing controversy with the Airbus scandal.

This follows Martin Amidu's invite to some four persons over the Airbus scandal.

The four are Samuel Mahama, who he describes as a brother of former President John Mahama; Philip Sean Middlemiss; Sarah Davis and Sarah Furneaux, all British nationals, to come and answer some questions on the various roles they allegedly played in the sale and purchase of the aircraft.

Mr Asiedu Nketia believes Martin Amidu is deliberately causing controversy and diversion with the Airbus scandal in a period where Ghana is battling with COVID-19.

"If Martin Amidu was fighting corruption I would back him but there is a clear indication that he has an agenda, this invite has the name of Mahama attached and it will only stare up controversy. Ghana has even closed its borders but you invite people who are UK citizens. So now that borders are closed how can they come into the country, this is not a fight against corruption but clearly an unnecessary diversion and controversy. We are now fighting a common enemy which is coronavirus, offices are closed how is his office special from the others, this is not the time for Airbus scandal at all", he spoke in a radio interview.

Background
Airbus, Europeâ€™s largest aerospace multinational, confessed to a High Court in London of paying huge bribes in order to secure contracts in Ghana, between 2011 and 2015.

The plane maker has been fined three billion pounds (Â£3bn) as penalties. Anti-corruption investigators, according to The Guardian Report, described the court's decision as the largest ever corporate fine for bribery in the world after judges declared the corruption was â€œgrave, pervasive and perniciousâ€.

â€œThe planemaker agreed to pay the penalties on Friday after reaching settlements with investigators in the UK, France and the US to end inquiries that started four years ago,â€ the report stated.

The Court, however, noted that Airbus â€œused a network of secret agents to pay large-scale backhanders to officials in foreign countries to land high-value contractsâ€™.

In the case of Ghana, the court found that the companyâ€™s bribe was to land the contract of purchase of a military transport aircraft.

â€œBetween 1 July 2011 and 1 June 2015 Airbus SE failed to prevent persons associated with Airbus SE from bribing others concerned with the purchase of military transport aircraft by the Government of Ghana, where the said bribery was intended to obtain or retain business or advantage in the conduct of business for Airbus SE,â€ the courtâ€™s statement of offence noted.

The documents indicated that one of the unnamed Ghanaian officials was â€œa key decision-maker in respect of Government of Ghana aircraft orders.â€

A number of Airbus employees â€œmade or promised success-based commission payments of approximately â‚¬5 millionâ€ to one of the Ghanaians implicated in the acts of corruption.

Although no names were listed by the UKâ€™s Serious Fraud Office, the New Patriotic Party (NPP) has come out to insist that former President John Mahama is the person identified as the â€œelected Government Official 1â€³ named in US and UK court documents.