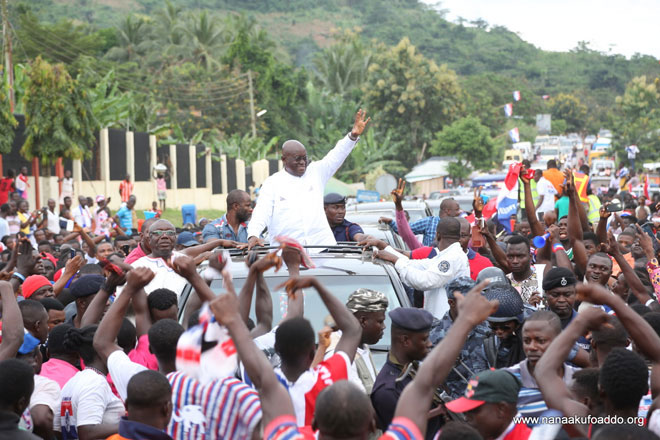 The President who is in the Ashanti Region to wrap up his campaign said he has developed the country since he took over the country in 2016.

Akufo-Addo says Ghanaians should give him another 4 years so he can complete the work he began.

He also said the presidential candidate of the NDC, John Mahama is engaging in a campaign of lies and deceit.

READ ALSO: “Mahama hasn’t changed, he still has nothing to offer” – Akufo-Addo

President wondered what John Mahama’s motivation was for seeking the office of President of the Republic of Ghana.

“I know of someone going about on a promising spree, that if he comes, he would do this and that, but the fact of the matter is he has been in power before, and what actually did he achieve? Nothing”, he said.

President Akufo-Addo continued, “We have experienced his stewardship before, and it didn’t meet the expectations of Ghanaians. So, he (Mahama) should stop lying to Ghanaians, for us to continue with our developmental agenda for the country!”

To the business owners, artisans, traders of Kokompe, the President recounted the promises he made to the Ghanaian people, and offered an update on the status of these pledged.

“I have come, this morning, to ask you if I have reneged on my promises to you, if I have disappointed you, if I came to lie to you. Since I have fulfilled most of my pledges to you, that means I was honest with you. For these reasons, you know I have lived up to expectations, so give me four more years to serve you better and continue my work,” he added.

The December 7 polls has been tagged a straight fight between Akufo-Addo and John Mahama.