I decided not to distribute parked ambulances to avoid accusations of favouritism - Prez. Akufo-Addo 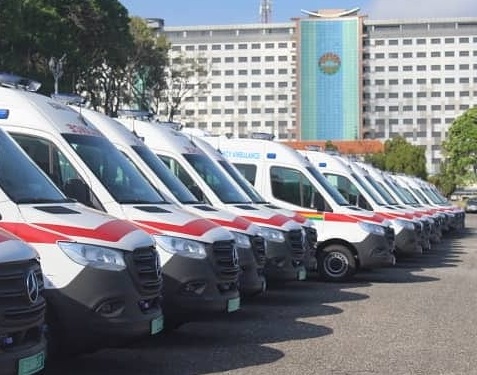 President Akufo-Addo says the government is waiting to take delivery of all at least all 275 ambulances before distribution begins.

The government has received criticisms for parking at least some 48 ambulances at the forecourt of Parliament.

These ambulances were procured by the government under the 1 Constituency 1 Million policy and yet they are not been used.

READ ALSO: Ghanaians should relax, parked ambulances are for them - Health Minister

The Minority in Parliament accused the government of not prioritizing the health sector. They said if the 48 are distributed it will help save some lives even though more ambulances will be needed.

President Akufo-Addo says he decided against distributing the ambulances because he didn't want to be accused of favouritism.

"The Minister for Special Development Initiatives Mavis Hawa Koomson who is responsible for bringing the ambulances told me some were in so she wants to distribute but I told her no. I want us to have all that we procured so we distribute to all the 275 Constituencies at once. All will be in by the end of this month. I know what will happen if you start distributing and some are not getting. On January 6, 2020, I will commission them and the distribution will begin simultaneously and nobody will accuse me of favouritism," he said in a media encounter at the Flagstaff House on December 13, 2019.

The Minister for Health, Mr. Kwaku Agyemang Manu says Ghanaians should exercise patience because the ambulances will surely be distributed.

The Ministry of Special Development Initiatives responded to Minority and said the ambulances will be released in January 2020.