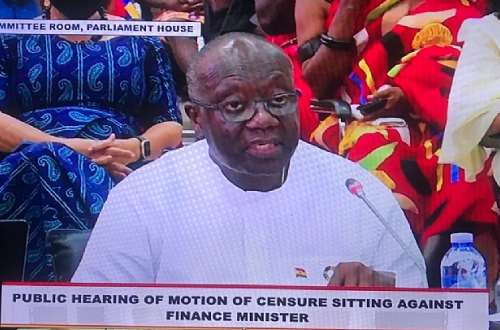 Finance Minister Ken Ofori-Atta has refuted claims by the minority that he misreported Ghana’s economic data to parliament.

“I have never misreported data to Parliament. It is completely not true,” he said.

This was in response to Ground Four of allegations contained in the minority’s censure motion seeking the removal of the Minister.

“I have served the country with integrity and honesty” he told the Ad hoc committee on Friday, insisting there has been greater accountability in the management of the public purse.

Meanwhile, the Minister also contended that the ground of recklessness as cited in Ground Five “presupposes that I have not been guided by the laid-down regulations.”

He continued: “I want to state that I have not been reckless in the management of the fiscal operations of the government.”

At least 7 grounds were originally tabled as the basis for the removal of the Finance Minister in the House, but the ad hoc committee has struck out two remaining five.

The Minority in Parliament filed a motion for a vote of censure against Ken Ofori-Atta making seven allegations against the minister including conflict of interest, financial recklessness leading to the collapse of the Ghana Cedi and gross mismanagement of the economy.

The minister in a written request, prior to the hearing, sought further and better particulars on the grounds for the motion while raising questions over the committee’s jurisdiction.