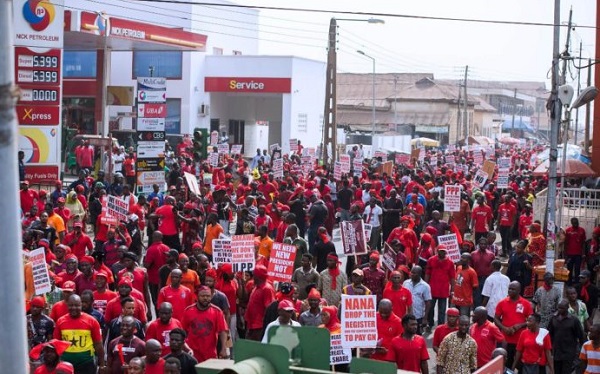 The Ashanti Regional Chairman of the New Patriotic Party (NPP), Bernard Antwi Boasiako, aka Wontumi, says the number of people who turned up for the NDC and other political parties demonstration against the new voters' register has given him hopes of NPP winning the 2020 elections.

The NDC and some other political parties hit the streets of Kumasi today January 21 to protest against the EC's decision to compile a new voters' register.

Chairman Wontumi says, he monitored the progress of the demonstration and the numbers they recorded only gives the NPP renewed hopes of winning the 2020 general elections.

"They said they will begin at 8:am but started at 8:30 with 360 and when they got to Asanteman, they were almost 700 so they were not even up to 1000. I followed them in an uber and I was just monitoring their movement. These numbers is a shame to NDC and their flagbearer John Mahama"

"I am surprised by the actions of CPP for instance, instead of fighting for Nkrumah's legacy you are supporting the NDC, these numbers have given us renewed hopes, the advice I have for the NDC is they should focus on choosing a running mate and launch their manifesto," he added.

The EC's decision to introduce a new voters' register has been met with fierce resistance from some eight political parties.

The Commission, however, insists the current register is not fit for purpose and its incoming register is enhanced with better security features.

The EC has stated that changing the voters' register is to have more credible voters register saying the current one is over-stretched and a new one will protect its credibility.

According to political parties, the justification by the EC for a new voters' register is unacceptable and will ''amount to complete wastage and needless spending of limited state resources''.

Meanwhile, the EC says the compilation of a new voters' register for the 2020 general elections will begin in April despite the lack of consensus over the matter.