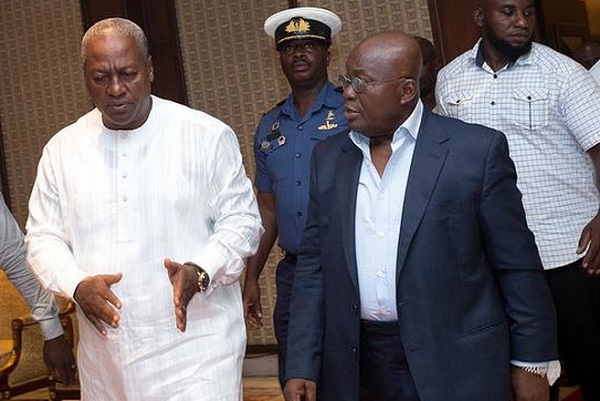 President Akufo-Addo has slammed former President John Mahama for his description of the Agyapa deal as an 'Akyem Sakawa' project.

President Akufo-Addo not only said he was 'very disturbed' by the ethnocentric tagging his ethnic group but also said, 'that is the kind of language we don’t want in our politics.'

"The comments made by my opponent (John Mahama) 'Ayem Sakawa' people I have not heard any public figure in this country comment on it. it is completely unacceptable. If I wake up to make such a comment about Northerners or Gonjas you can imagine the uproar that will be in the country. A former President of Ghana you can call a group of Ghanaians 'Sakawa' people and it involves the group of a sitting President"

He also questioned why Civil Society groups have not condemned the statement and urge the public to discuss the issue devoid of insults.

"His statement has been passed without comments from groups. At the same time, we have been told to bring the politics of insults to an end. We need to focus on this matter in an even-handed way."

In the post which Mahaha shared, Mr Adongo described the Agyapa Royalties deal as a “big fraud on Ghana” by President Nana Akufo-Addo and the ‘Akyem Mafia’.

Parliament, in line with the Minerals Income Investment Fund (MIIF) Act, 2018 (Act 978), recently approved some agreements to allow the country to derive maximum value from its mineral resources and monetise the mineral income accruing to Ghana in a sustainable and responsible manner.

The move gives Agyapa Royalties Limited the right to secure about $1 billion to enable the government to finance large infrastructural projects.

The Minority in Parliament boycotted the deal and accused the government of mortgaging Ghana’s gold resources.

Former President John Mahama also reiterated the Minority’s concerns and said he will not respect the deal should he win the 7 December 2020 polls.

Below is Mr Adongo’s statement which was also shared on Facebook by Mr Mahama:

Agyapa Royalties Fraud Is The Last Straw: The Akyem Sakawa Boys and Grandpas Must Go

Agyapa royalties deal is a big fraud on Ghana by Akufo-Addo and the Akyem Mafia. You mortgaged Getfund proceeds in excess of GHS25 billion for the next 10 years to borrow $1.5 billion and yet you could not expand educational infrastructure and build new schools to end double track, you mortgaged bauxite buried on the ground to Sinohydro to borrow $2 billion but has nothing to show after almost 2 years, you mortgaged ESLA proceeds for the next 10 years’ worth in excess of GHS30 billion in 10 years to raise energy sector bonds of about $1.3 billion and yet energy sector debts remain unpaid and you have since accumulated over $ 2 billion additional energy sector debt with power producers threatening to shut their power plants.

In addition to borrowing $9 billion in 3 years in Eurobonds alone and illegally borrowing $500m term bonds in February 2020 on the capital market without Parliamentary approval in violation of Article 181 of the Constitution, all without anything to show, what magic can you perform with $500m Agyapa theft money?

How can 76-year-old Akufo-Addo mortgage revenues of about GHS75 billion of the state for his maladministration to steal without caring about how his children and grandchildren will manage the economy into the future.

No wicked man has ever ruled this country and destroyed Ghana’s fiscal and debt framework the way Nana Addo and the empty lying Dr Bawumia have done.

It is estimated by industry players that only 11 major mining companies in Ghana will give Ghana an average of $250 million a year, $3 billion in 10 years and $4.250 billion in 15 years in royalties payments being planned to hand over to Agyapa Royalties for just $500m. These estimates exclude new mining developments that will come onstream in the next 15 years such as the highly profitable mining development in the Upper East by Cardinal Resources. How did they value $4.250 billion in 15 years to arrive at $500m as 49% of that value?

You can't put Lions in charge of sheep and expect to come back and meet the sheep alive.

They will now sell us to borrow to satisfy their insatiable corrupt habits if they are allowed 1 more year in office.