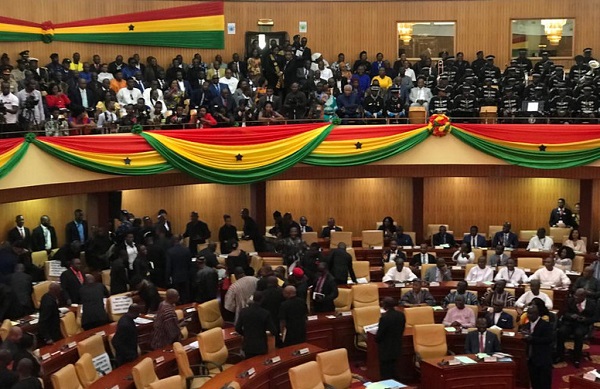 The Minority walked out of Parliament
Shares

The Majority in Parliament has appealed to the Speaker Prof. Mike Ocquaye to stop the Minority from debating the 2020 State of the Nation Address.

The Minority today walked out of Parliament when the President was about to deliver the State of the Nation Address.

After every State of the Nation Address the Majority and Minority debate for almost two weeks to either accept or reject what the President delivered.

Communications Minister, Ursula Owusu-Ekuful says it will be in the interest of the Minority not to appear during the debate because they never sat to listen.

What will they be debating? It is the duty of the speaker to regulate the conduct of members of parliament. You were not part of the presentation of the SONA. You didnâ€™t deem it worth your time to sit and listen to it, what moral right do you have to sit and debate. They should boycott the debate as well. They should do the noble and the honourable thing and follow through this path that they have embarked on.â€

â€œOur leader has made a plea to the speaker that, if they were not here, they not be allowed to debate, it is up to the speaker to determine, but if they attempt it, they will see us in the house.â€

The Minority during their presser said, they will decide whether to participate in the SONA debate in parliament if that is opened up for discussion later.

There are reports that the Majority is planning on using all legal means available to stop them from being a part of the debate even though no law bans them from debating the SONA even though they boycotted.

The Minority explained that their decision to walk out was to show President Akufo-Addo that if he is insensitive to the issues affecting Ghanaians they can equally be insensitive to his State of the Nation Address.

One major reason they gave was that the President does not listen to their views and opinion concerning the plans to compile a new Voters Register.

They then said Ghana's democracy is under threat and President Akufo-Addo is the one hindering the progress of this important factor.