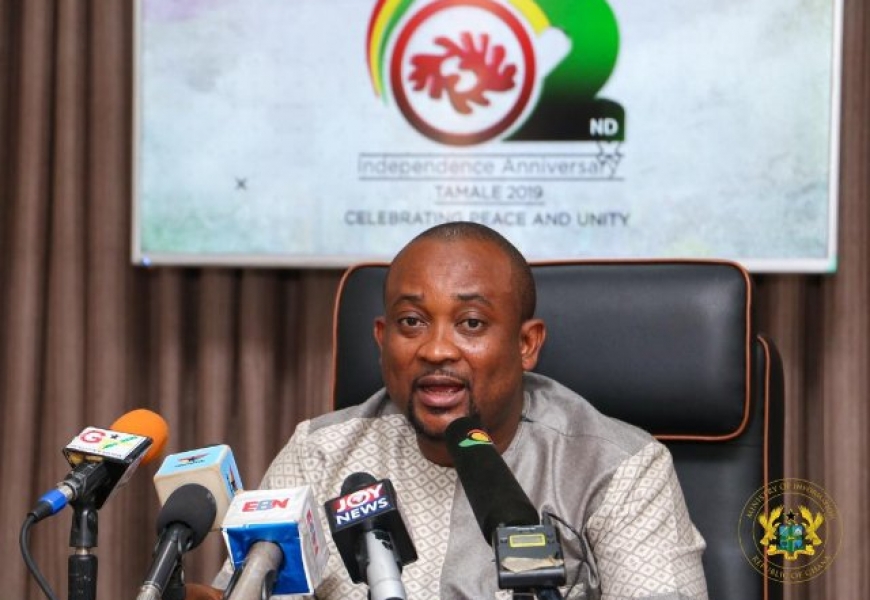 According to him, former President Mahama borrowed to build their stomachs instead of investing in the Ghanaian populace.

In an interview on Kumasi -based Fox FM he said the former appointees  “ built infrastructures in their pockets and stomachs”.

This comes at the back of Former President John Mahama's comments that contracts for the construction of the 54-kilometre Jasikan-Dodo Pepesu road has been inflated by President Akufo-Addo accusing the President of falsifying facts and figures on road contracts awarded by his government before the NDC left office.

Responding to the former President’s allegations, Pius Enam Hadzide urged Ghanaians to treat Mr Mahama’s claims with the contempt it deserves since his appointees and himself did little in terms of infrastructure while in office to improve the lives of Ghanaians.

He added that: “Former President John Mahama claims he has brought Dubai to Ghana for building the Kwame Nkrumah interchange. Go there and see when it rains. Every place gets flooded. Same to terminal three. They borrowed huge money and use themselves to develop big stomachs".

Former President John Mahama disclosed that contracts for the construction of the 54-kilometre Jasikan-Dodo Pepesu road has been inflated by President Nana Addo Dankwa Akufo-Addo.

He accused him of falsifying facts and figures on road contracts awarded by his government before the NDC left office.

He also accused him of abrogating all contracts and re-awarded them at exorbitant prices.

He used the Jasikan-Dodo Pepesu road and said Nana Addo re-awarded the contract for over $100 million dollars when he [Mahama] awarded the same contract – which was later abrogated by the NPP – for over $40 million.

Meanwhile, President Nana Addo Dankwa Akufo-Addo during his tour in the Oti region announced that work on the 54 kilometre Jasikan to Dodo Pepesu stretch of the Eastern Corridor Road will commence from the 3rd quarter of 2019, that is from July.

According to him, an amount of $45 million has been earmarked, under the phase 1 projects of the $2 billion Government of Ghana-Sinohydro Master Project Agreement, for the construction of the Jasikan to Dodo Pepesu road.

Speaking at a durbar held in his honour at Jasikan, on Tuesday, May 14, 2019, he recounted how, in 2016, he said he was yet to see the so-called "unprecedented infrastructural projects” touted by his predecessor, John Dramani Mahama."

"I stated, at the time, that, wherever I have been to, I never saw these so-called unprecedented infrastructural projects he (Mahama) claimed he had done. He [Mahama] responded by telling me that I was asleep, the reason why I hadn't seen these projects''.

"However, there has not been a single durbar across the country where I have been where the issue of the poor road network has been raised by the Chiefs and people," the President said.