NDC does not burn markets , police should fish out culprits - Ofosu Ampofo 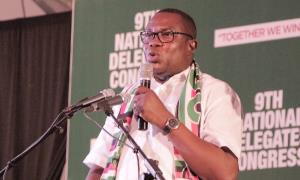 NDC does not burn markets,police should fish out culprits - Ofosu Ampofo
Shares

The National Chairman of the opposition National Democratic Congress (NDC) , Mr Samuel Ofosu Ampofo, says the party he leads does not burn markets and that the police service should fish out culprits responsible for the act.

According to him, the NDC rather build markets to provide a conducive environment for petty traders to trade and earn money to lead decent lives.

The NDC chairman's comment follows the allegation levelled against him as the person behind the recent fire outbreaks in some markets in parts of the country.

Responding publicly for the first time to his recent invitation by the Criminal Investigation Department (CID) of the Ghana Police Service to assist in investigation into recent fire outbreaks in some markets during the inauguration of a new office for the Gomoa West at Gomoa Dawurampong in the Central Region last Saturday, Mr Ofosu Ampofo indicated that burning and destruction of markets was not an agenda of the NDC.

He stated that: “The biggest opposition party I am leading does not burn markets, but rather we construct markets and so if there are market fires and the police want people to interrogate, they should not come to the NDC but should rather go elsewhere to fish out for the culprits.”

The National Disaster Management Organization (NADMO) in last month, April 2019 attributed the series of market fires that hit two major markets in the Kumasi metropolis of the Ashanti region; the Kumasi Central Market and the Asafo Market in a space of 3 days to the opposition NDC.

For three consecutive nights, Friday, Saturday and Sunday, the Asafo market and the Kumasi Central market were gutted by fire with hundreds of traders who lost their wares estimated at several thousands of Ghana cedis.

The Ashanti Regional Director of NADMO and First Vice Chairman of the NPP in the Ashanti Region, Kwabena Nsenkyire speaking on Angel FM laid the blame for the fires at the doorsteps of the opposition National Democratic Congress (NDC).

He said the party is carrying out an agenda to make the country insecure, as it was heard on a leaked tape alleged to be the voice of the NDC’s National Chairman, Samuel Ofosu Ampofo.

Kwabena Nsenkyire also asserted that the NDC had sought, by the market fires, to spite the beauty of the 20th-anniversary celebration of Asantehene Otumfour Osei Tutu II.