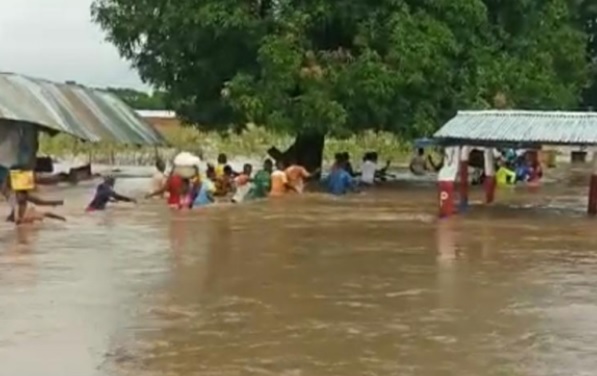 Minority Leader Haruna Iddrisu has blamed the NPP government for the flood that led to the death of a 3-year-old and others.

He said government's One Village, One Dam project is to blame.

"Dr Mahamudu Bawumia must be ashamed, the people in these areas of the flood were leaving their lives and were happy. With the money they are giving them what will that do?. The NPP government and Bawumia must take full responsibility and even render an unqualified apology to all the communities affected by the flood that by their inactions and commissioning of the One Village, One Dam project which has resulted in this essential lost of live, human properties and other valuables.

Vice President Dr Mahamudu Bawumia had to cut his Accra tour shot as he donated money to support flood victims in West Mamprusi district in the North East Region.

This was after nearly 700 residents in some communities were displaced by torrential flooding that has wreaked havoc in the area.

Residents in some four communities in the North East Region were forced to evacuate on October 1, following a heavy downpour.

The rains have destroyed properties running into thousands of cedis and rendered many homeless.

Two dams at Dimia and Guabluga also burst when the rains began which worsened the situation.

Rising water levels inundated the communities sparking chaos as panicked residents ran helter-skelter to salvage what was they could.

The situation also caused the main Walewale-Nalerigu road to submerge, leaving a never seen traffic on the busy highway with dozens of travelers and motorists stranded.