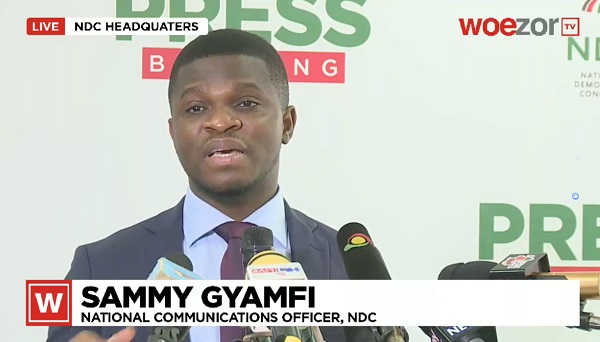 Mr Gyamfi speaking at the weekly NDC press conference said the NPP was formed on tribal lines and so they are bent on disenfranchising certain tribal groups.

He called out President Akufo-Addo to bring an end to some reports of intimidation in the ongoing registration exercise by recalling all military men from their bases.

"The harassment of security officials and NPP thugs at some registration centres has led to several people not being able to register. We have received reports of several brutalities of people of the Ewe tribe in Banda. This has been the plan of the tribalistic Akufo-Addo government to physically and violently prevent these Ghanaians from taking part in the voters exercise on grounds that they are Togolese. It is clear the NPP wants to disenfranchise people based on their tribe.".

The voters' registration exercise has seen some chaotic incidents in various regions.

President Akufo-Addo speaking in Kumasi last Friday said he is unaware of intimidations at registration centres and said the process is smoothly ongoing.

“What I have heard is that the exercise is going on smoothly in Asawase and Asokore-Mampong, we thank God for that. That is the most important thing to us all to leave in unity and peace."

The NDC has accused the government of trying all means to disenfranchise people in their stronghold.

They have spoken heavily against the military presence in the Volta and Oti Region.

Also, they have condemned what they describe as an attack on Ewes at Banda when the military stopped a group of people who were on their way to register.

This led to the Ghana Armed Forces releasing a statement to clarify the issue and said they were called to the Bono Region by the REGSEC.