NPP manifesto: We thank God COVID-19 did not strike under Mahama's presidency - Akufo-Addo 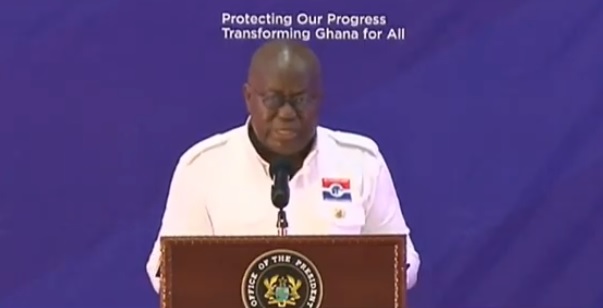 President Akufo-Addo says Ghanaians will thank God that COVID-19 pandemic did not strike under the presidency of John Mahama.

President Akufo-Addo speaking at the NPP manifesto launch at the University of Cape Coast in the Central region said had this happened under John Mahama, Ghana would have collapsed.

He, therefore, charged Ghanaians to shun the former President and the NDC by voting for him and the NPP so he continues to better the lives of all.

"Ghanaians might have a short memory but not short enough to remember the broken down freezers, irons and other household equipment thanks to the five years of 'Dumsor'. Our memories are not short enough to forget that the economy under John Mahama was such a wreck that there was a ban placed on all recruitment into our public service. Our memories are not short enough to forget that teachers worked for three years and were only paid for three months. I have heard him say that Ghana's economy is in 'tatters' not because of COVID-19 but due to mismanagement, I doubt that he can recognize a well-managed economy even if it is slapped in his face. Today we can provide one hot meal for students, pay water bills of Ghanaians for six months, subsidize electricity bill for 3 months. We thank the Almighty that the pandemic did not strike under his presidency when there was no money to pay teachers and nurses allowances"

COVID-19 has had a global effect on all economies and Ghana has not been left out.

Several people have lost their jobs as well as companies folding up but the government promised to continue making some interventions to ensure Ghanaians are relieved.

The President also said the Free SHS policy can't be trusted in the hands of former President John Mahama.

He said Mahama can't run the policy which he never believed could be possible.

Mahama has said he will review the policy when voted into power but President Akufo-Addo says his credibility on the policy is zero because he and the NDC run down the idea when the NPP proposed in the lead up to the 2016 general elections.

President Akufo-Addo said added that his main focus is to improve the lives of Ghanaians and he wants an additional 4 years to do that.