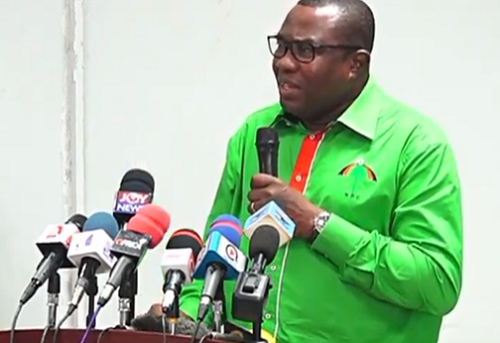 The National Communications Officer of the NDC Sammy Gyamfi says a tape circulating in which their National Chairman Samuel Ofosu Ampofo is heard saying that the party deployed its thugs the “Azorka Boys” during the recent Ayawaso West Wuogon by-election which was characterized by violence was doctored and untrue.

An audio has been circulating in the media which has the Ofosu Ampofo saying that the “Azorka Boys” had to be brought down to Accra from Northern Ghana to provide security for the NDC party during the Ayawaso by-election.

Mr Gyamfi says that is a doctored tape and it was put together by their opponent the NPP to score political points and also divert attention from the Anas "Galamsey" expose.

He, therefore, entreated the general public to disregard the tape making rounds.

"The tape been circulated is a doctored tape, it is totally fake, it has all the elements of diversionary tactics, it is obvious that it is a desperate attempt by the government to divert attention from the latest expose by Anas which has uncovered some government officials engaging in illegal mining "Galamasey".

"I can tell you that those tapes have been doctored and those are not the words that were spoken, what they do is to slice the tapes, insert their own versions and with the technology available today, they add things to them"

"I can also tell you that we are being spied on and lied about. They are not bold to put out the things that they record, so they add to it and try to create a certain perception about us,"  Sammy Gyamfi told Joy FM.

In the audio making rounds, Mr Ampofo is heard briefing members of the NDC in an undisclosed location about what informed his decision to announced that the NDC had pulled out of the election barely two hours into the exercise.

“I mean you have Chief Azorka in my meeting saying, Chief thank you, I said why, he said if you had not taken this decision I don’t know how my men would have gone back to Tamale. The issue is that they had brought down the Kandahar Boys and the Kandahar boys know our boys from Tamale. You know it was a targeted attack and so once they spot you they invite them, and then around that time my people were so defenseless and they had packed themselves in pickups so cordon off and hounding them was very very easy and they had not anticipated all these things coming so it hasn’t been easy but for me how we take the battle from here is most critical.

“It is a question of mind game that they’ve come to play, I was here because I thought I should come and lift your spirits up and let you know that it was not a cowardice decision at all. It was a strategic decision which will benefit us,” Ofosu Ampofo added.