Politics need not be dirty, let's be civil in the way we address each other : Mahama advises Bawumia 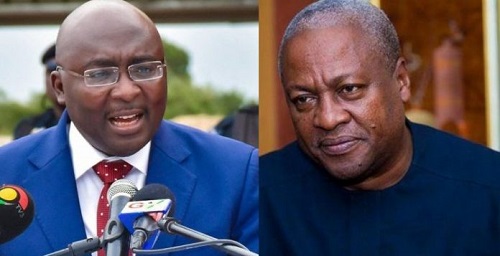 Former President and flagbearer for the NDC John Mahama has advised Vice President Dr Bawumia to be civil in his political comments.

Responding to question during his live Facebook session, John Mahama said politicians must be civil in the way they address each other.

He also added that the incompetent tag given to him by Dr Bawumia does not really bother him and he will continue to be courteous in his comments.

"We must always be responsible in our discourse and we must be civil in the way we address each other so it does not matter is uncivil to me or who abuses me or who throws insult at me and I know he calls me the incompetent one but it does not really bother me I think I will continue to respond as courteously as possible, politics need not be dirty.."

Addressing issues of security, John Mahama said the current NPP government have chosen politics over merit causing the upsurge in criminal activities in the country.

"One of the thing that I did when I was president is to put the right people at the right places if you put politics above merit in the security sector you will have the results that we are had various specialised units that dealt with the issues of crime and security."

Flagbearer of the National Democratic Congress (NDC) and former President John Mahama says the revocation of licenses of some financial institutions by the Bank of Ghana (BoG) was not the best option.

Mahama described the Bank of Ghana’s crackdown in the financial sector is a “national security threat.”

Mahama who was interacting with Ghanaians on social media on Thursday said revocation of licenses would have been the last resort the BoG would have used.

He, therefore, said the Akufo-Addo government and the BoG instead of revoking the licenses of these financial institutions could have addressed the issue in a more favourable way.

“Revocation of licenses would have been the last resort and not the first resort. No country is immune to crisis in the financial sector,” he added.

He also said about 20,000 direct jobs were lost because of the financial sector clean-up.

“About 20,000 people have lost jobs directly due to the 420 financial institutions that have been shut down. We have not even added the indirect jobs. By the time we do the total calculation, about 40,000 to 50,000 people may have lost their jobs,” he added.