Referendum: NDC's 'NO' campaign is an unpatriotic betrayal of the Ghanaian people - NPP 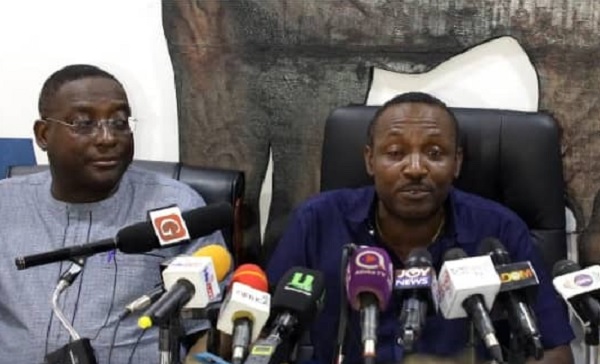 Mr John Boadu (right) addressing the media. On his right is the NPP's Director of Communications, Yaw Boaben Asamoa

The New Patriotic Party (NPP), has described the National Democratic Congress' (NDC) 'NO' campaign for the upcoming referendum as a betrayal of the Ghanaian people.

The NPP at a press conference on Monday, November 18, 2019, described the unexpected change of the NDC as an "unpatriotic betrayal of the Ghanaian people” and “a naked show of dishonesty, deceit, indecision, lack of candour and integrity from the biggest opposition party in the country".

John Boadu who is the General Secretary of the party addressed the media and said NDC is fully aware of how difficult it would be for the amendment to be carried through without a consensus, they pretended to be in support until this last minute.

"There is a strong school of thought, ladies and gentlemen, that the only thing that can explain the NDC’s unexpected U-turn is that they are fully aware of the difficult task of getting the amendment through without a consensus."

"They knew very well but pretended they were in favour until this last minute when huge state resources have been committed into such an important exercise", Mr Boadu lamented.

The NPP emphasized that a “Yes” vote was neither about the NPP nor NDC but what was good for Ghana.

The flagbearer for the NDC John Mahama said the party will only change their stance on the referendum if other amendments which they have proposed are carried out.

The referendum is scheduled for December 17, 2019.