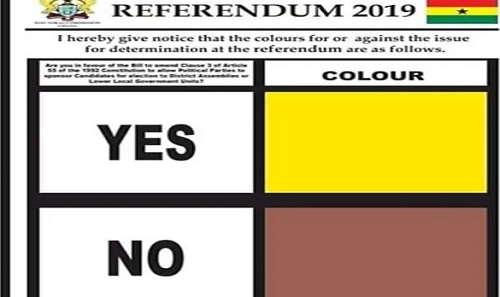 Policy think tank, Strategic Thinkers Network-Africa (STRANEK-Africa) have opted to campaign for a 'NO' vote in the upcoming referendum.

Their position is now in line with what the National Democratic Congress (NDC) is rooting for.

STRANEK in a release said the involvement of partisan politics at the local level will not only be injurious but will weaken the local government systems.

They are therefore urging Ghanaians to vote 'No' on December 17, 2019.

IT IS A NO CAMPAIGN FOR THE UPCOMING REFERENDUM- STRANEK

Strategic Thinkers Network-Africa (STRANEK) has keenly monitored the issues surrounding the December 17 referendum and has joined the conglomerate to vote NO on that day.

The involvement of partisan politics at the local level will not only be injurious but will weaken the local government systems.

The MMDCEs and Assembly members voted on partisan lines will cause them to do the bidding of their party even if it will be inimical to their municipalities or districts or electoral areas. Their party's position will mostly be chosen over the general wellbeing of their people at the local level.

We should not allow politics to take centre stage in all nooks and crannies of our country. Politicising everything so far has affected our development and allowing it to be part of our local government systems should be the last thing we should think of as a country.

The Electoral Commission must be reminded of being neutral in the upcoming referendum whiles conscientising voters. Officials who go about influencing voters to vote in a certain direction must be heavily brought to order.

We are indeed all involved in building our motherland.