SHS placement: Some of the fainting, agitation at Black Star Square was stage-managed - Education Minister 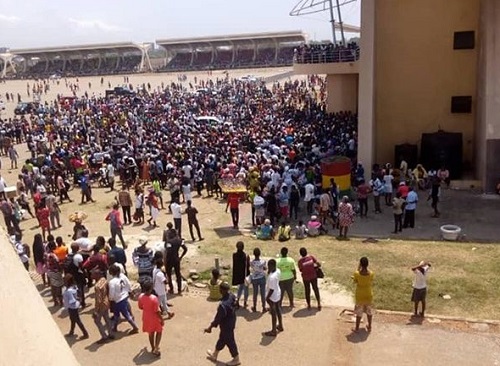 The Education Minister Matthew Opoku Prempeh is alleging that the chaos witnessed at the Black Stars Square concerning the Computerised School Selection and Placement System for Senior High Schools (SHS) process was stage-managed.

Dr Matthew Opoku Prempeh says people were bused to the venue to put up the drama where some parents were agitating and some students even collapsed.

Dr Prempeh speaking on Ekosii Sen on Asempa FM said: "I will give myself 85% so far as an Education Minister, what we saw at the Independence Square with people agitating and fainting was all stage-managed, someone bus these people from places. Someone paid people to take photos so they broadcast it, someone who wants to be President in Ghana is behind this, he wants Ghana to be in a bad state because of his ambitions of becoming President. So I will say it again most of the people there were bus to come and act that way"

There were reports of at least two teenagers collapsing at the Independence Square Monday, September 16, 2019, as frustrated prospective candidates and parents sought admission.

The Computerised School Selection and Placement System (CSSPS) was reportedly hacked, frustrating parents and guardians whose children were either not placed or wrongfully placed.

The situation led to people besieging the Black Star Square for solutions to their problems as the Ministry had established a centre there to address difficulties of parents and their children.

Anxiety, coupled with sheer heat and overcrowding at the centre caused some of the teenagers trapped in the centre of the activities to faint.

Cameras captured some of the fainted pupils being carried into ambulances stationed at the venue.

The Black Star Square returned to its normal state after the chaos due to the GES intervention.

The process stopped abruptly on September 16, 2019, due to the chaos.

Students have been numbered and divided into two groups according to the schools given them by the GES.

This year's CSSPS has been faced with a lot of challenges, most JHS students have not been placed by the system forcing the Ghana Education Service, GES to provide options for self-placement.

Deputy Director-General in charge of Quality and Access at the GES, Dr. Kwabena Tandoh, said students who were not placed in a school of their choice should go back home and select a school under the self-placement module.

He, therefore, asked parents to keep calm as the service was committed to addressing their problems within 24 to 48 hours.