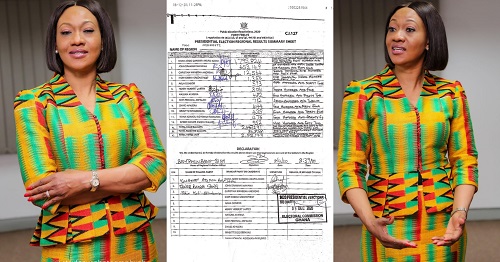 The Wenchi High Court during Wednesday’s sitting has ruled that the Electoral Commission, EC present its Techiman South electoral sheets to the petitioner, Christopher Beyere for inspection.

The court’s decision falls on the back of the Commission’s failure to submit the original documents as directed by the judicial panel in its previous sitting.

In view of this, Mr Christopher Beyere has been awarded an amount of 2000 as reparation.

The Commission has been graced a 3-day period to file the documents before the Court resumes its subsequent sitting.

The election petition trial has been adjourned to Monday, April 19, 2021.

Also, EC’s returning officer for the constituency in the 2020 general elections, Nana Dwamena has been directed by the court to answer all interrogatories filed by the petitioner.

The petitioner is praying to the court to know from the Electoral Commission if collation was done in the constituency before the results were declared among others.

In his petition, he wants the court to declare that the gazetting of Martin Adjei Mensah Korsah as the winner is null and void.

But the plaintiff NDC parliamentary candidate insists that is not a true reflection of the facts.

According to him, per the pink sheets of the NDC agents at each of the 267 polling stations, he garnered 50,306 votes in the parliamentary election whilst the 1st Respondent polled 50,013 votes.