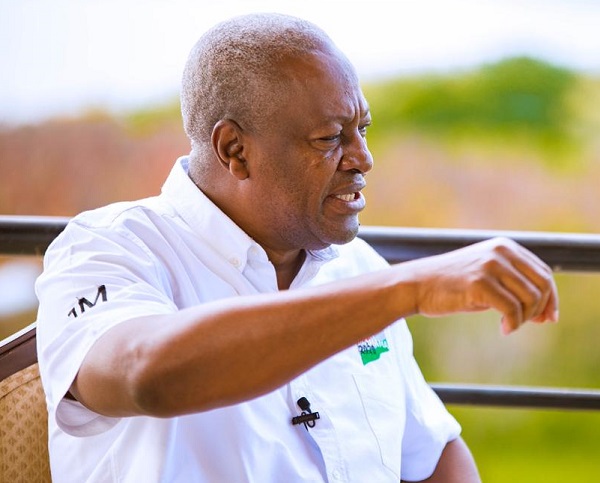 Flagbearer of the National Democratic Congress (NDC) John Dramani Mahama says the future NDC government will be better than the previous one.

He has asked Ghanaians to give him a second chance to right the wrongs of his previous administration.

Speaking with the Chiefs and people of Ullo in the Upper West Region, Mahama says due to his experience as a President, he will be the best person to lead Ghana because he will correct all his past mistakes.

“Development takes place in stages. The last time we were in government, it was to improve the road network so we get many of the roads on contract. Unfortunately, because the NDC left office, a lot of these projects came to a standstill. So I can assure Nana that, I am in a unique position because I am the only President who has the opportunity to come back and correct his mistakes. No other President in Ghana can do that. I believe that a new NDC government will be a much better government than the previous one.”

Meanwhile, President Akufo-Addo has slammed former John Mahama for his description of the Agyapa deal as an 'Akyem Sakawa' project.

President Akufo-Addo not only said he was 'very disturbed' by the ethnocentric tagging his ethnic group but also said, 'that is the kind of language we don’t want in our politics.'

"The comments made by my opponent (John Mahama) 'Ayem Sakawa' people I have not heard any public figure in this country comment on it. it is completely unacceptable. If I wake up to make such a comment about Northerners or Gonjas you can imagine the uproar that will be in the country. A former President of Ghana you can call a group of Ghanaians 'Sakawa' people and it involves the group of a sitting President"

He also questioned why Civil Society groups have not condemned the statement and urge the public to discuss the issue devoid of insults.

Mahama responding to Akufo-Addo said he has no moral rights to brush off his comments as his past records prove he has made more ethnocentric comments.