W/R: Residents of Kwesimintsim block roads ahead of today's polls 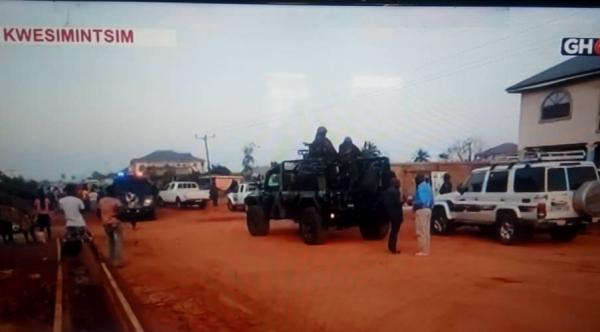 Residents of Whindo in the Kwesimintim constituency in the Western region have blocked roads leading to the community, ahead of today's polls.

The residents blocked the roads and set tyres ablaze to prevent the Election Commission from getting access to the town to deliver the election materials.

According to them, they put up that behaviour due to the lack of development in the town, which includes the poor nature of the roads.

"As about 5 am today tyres were set ablaze and instruments were used as road blocks to prevent the electoral commissioner as well as other people from getting into the town. They complained about their road network being very poor and if nothing was done before the election they aren't going to allow ballot boxers into the town, GH One reporter said.

According tohim, the Police have been able to resolve the situation with the fire service quenching the fire. He confirmed that the road has been cleared and people are able to cross over to the community."

He further said that when the Ghana Armed Forces arrived the people who set the place ablaze tool to their heels.

Ghanaians will today, December 7, 2020, go to the polls to elect a President and 275 Members of Parliament to steer the affairs of the country for the next four years.

A total of 17,027,655 registered voters are expected to cast their ballot at about 33,367 polling stations across the country.

According to the Electoral Commission (EC), voting will commence at 7am and end at 5pm on the election day.

In all, 12 candidates are on the ballots seeking to be elected as President of Ghana.