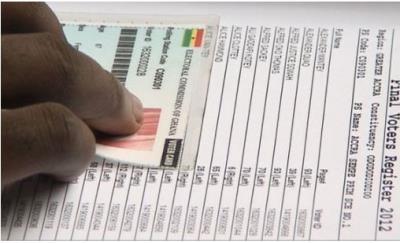 We support the EC's move to acquire new voters' register - Coalition of pol.parties

A group calling itself coalition of political parties are in support of the Electoral Commission's move to acquire a new voters' register ahead of election 2020.

The parties believe the new voters' register will enhance the credibility of the elections scheduled for December 7, 2020.

Addressing the media at a press conference today, leader of the Coalition of Political Parties, the LPG’s Kofi Akaploo, called on all other political parties in the country to rally behind the EC to organise a free and fair election.

“The EC has made a solid case for a new register in terms of cost, time and credibility. We support the compilation of new register and we expect all political parties to support the EC in the quest to deliver a better-organised election than before.”

“We are saddened by the continued bashing of the EC by the NDC. We know it is deliberate.we wish to call on all well-meaning Ghanaians to call the so-called main opposition party to order,” he added.

He further said the NDC was proving to be “a danger to the confidence generated in the Inter-Party Advisory Committee (IPAC).

“You will notice that consistently any time we all sit at IPAC and take a decision, the NDC will come out to contradict what we had all agreed on. Any time the NDC has to work with other political parties in the national interest, they turn around and stab the nation in the back.”

The NDC is part of a group of opposition political parties known as the Inter-Party Resistance Against New Voter Register that has planned to stage three different demonstration exercises against the EC.

The group is made up of the National Democratic Congress (NDC), the United Progressive Party (UPP), the All People’s Congress (APC) and the United Front Party (UFP).

However, the NDC has maintained that the EC’s move to compile a new biometric voters’ register is illogical.

The General Secretary of the NDC, Johnson Asiedu Nketiah said the new register “defies logic and must be fiercely resisted as we in the NDC intend to do.”

“The current voters’ register was used recently to successfully elect about 6,600 district assembly members and about 33,000 unit committee members. Yet the Electoral Commission is telling us that the same register cannot be used to elect one person and 275 Members of Parliament,” Asiedu Nketia said.

Again, Parliament has approved the GH¢444,846,663 requested by the EC for the compilation of a new voters register which the commission believes will be more credible and efficient than the existing one.