Why did it take you too long to realize deporting Aisha Huang was a mistake? - OccupyGhana to Prez. Akufo-Addo 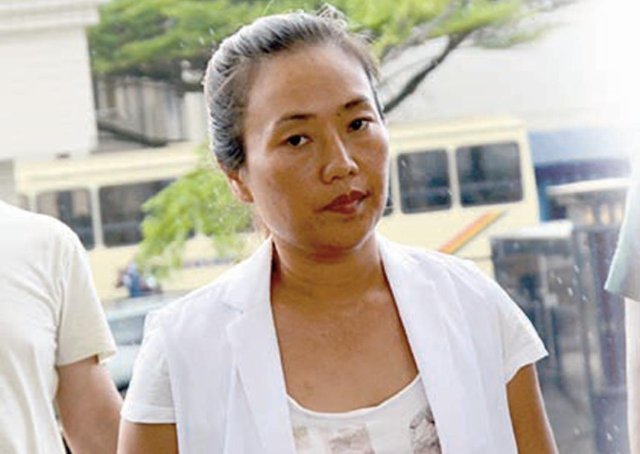 OccupyGhana a pressure group say they are worried it took President Akufo-Addo and his government a long time to realise the deportation of Chinese 'galamsey queen' Aisha Huang was a mistake.

The group in a statement is wondering how the government had not been able to realise this even when several bodies in the initial stages of the matter questioned the actions of the government.

â€œWhat we are concerned with is that it had to take hindsight, an understating of the situation only after it had happened and almost two years after the fact, for the Government to realise how bad a mistake that was.

â€œGhanaians knew right from the start that it was a mistake and said so to the Government, which ignored us, making this regret very little and very late,â€ the statement said.

This comes on the back of President Akufo-Addo during an interaction with students at the Princeton University in the United States of America admitting that the move to deport Aisha Huang was wrong even his Senior Minister, Yaw Osafo-Maafo defended the decision.

The President after conceding said he is confident that henceforth, all foreigners caught in the illegal mining business would face the law.

He noted they would be processed under the newly amended illegal miming law which gives a minimum of 15 years imprisonment to convicts.

Below is full copy of the statement:

RE: FIGHT AGAINST GALAMSEY - OCCUPYGHANAâ€™S RESPONSE TO THE PRESIDENTâ€™S REGRET ON AISHA HUANGâ€™S DEPORTATION WITHOUT TRIAL

OccupyGhanaÂ® has noted with wry resignation the recent statement by the President that he regrets the Governmentâ€™s decision to deport Aisha Huang without first completing the trial of her for mining-related offences. The President specifically said that that decision, â€œon hindsight, was a mistake.â€

We appreciate the Presidentâ€™s candour in admitting this mistake. We agree with him that that decision was a mistake, a grave and regrettable one. What we are concerned with is that it had to take hindsight, an understating of the situation only after it had happened and almost two years after the fact, for the Government to realise how bad a mistake that was. Ghanaians knew right from the start that it was a mistake and said so to the Government, which ignored us, making this regret very little and very late.

And, while the legislative amendment that enhances the punishment regime for mining-related offences might deter some from engaging in Galamsey, we do not see how that, in and of itself, will prevent the repetition of the governmentâ€™s mistake. That is because the mistake, the decision to free Aisha Huang without trial, had nothing to do with the law as it existed at the time.

We take these positions because there was sufficient basis, at the time of the decision, to show that the deportation without trial would hurt and weaken the fight against illegal mining. Certainly, the Government was aware of the message that that act gave to the whole world: the law will be enforced against citizens, but foreigners who breach the same law would be flown to their countries to sleep in the comfort of their beds and enjoy their illegal made-in-Ghana Galamsey booty. Yet the Government went ahead, took that decision and implemented it. That was the mistake, not the law.

For several years, OccupyGhana has been involved in the campaign against illegal mining. From that, we know that Ghana cannot divorce the scourge of Galamsey from the invidious roles played by several foreign nationals who exploit our weak and sometimes non-existent internal security system to engage in illegal mining.

That is why we were extremely disappointed when the then Minster of Lands and Natural Resources, Mr. Peter Amewu, instead of seeing to it that the law was simply enforced, was reported to have met with the Chinese Ambassador to Ghana and the Mayor of Chinaâ€™s Guangxi Zhuang Province on 27th March 2017, to solicit their help to fight Galamsey, saying, â€œwe are begging you to help us address this particular difficulty that we are having.â€

Disappointed in this anemic and pathetic approach by the Minister towards the fight, it was refreshing and reassuring when the President, in a speech at Akyem Wenchi in April 2017, called the bluff of Galamsey operators. We issued a statement on 2nd May 2017 to stand with the President on this matter. Pleased with the stance taken and leadership provided by the President at the time, we expressed the â€œhope that the fight against this scourge will continue on an even higher level,â€ and that â€œwith the President taking the lead and the support of all well-meaning Ghanaians, we will win.â€

This was followed by the launch of Operation Vanguard by the military in July 2017 to combat Galamsey operations.

However, the matter involving Aisha Huang and the Governmentâ€™s handling of it beggars belief, insults our intelligence, contradicts the Presidentâ€™s numerous pledges to fight Galamsey, and is probably the most obvious indicator that the Governmentâ€™s commitment to the anti-Galamsey fight has been at best half-hearted.

When Aisha Huang was first arrested, being as obviously involved as she was in Galamsey, she was only charged with petty immigration infractions, namely hiring foreign nationals and disobeying directives. The steepest penalty for these was a risible and ridiculous GHS12,000 administrative fine!

It took an OccupyGhana Petition addressed to the Attorney-General in May 2017, protesting this and demanding that proper charges are laid under the Minerals and Mining Act, for that to happen. In that petition we pointed out that â€œthe fight against illegal mining in Ghana is a fight to protect, not only the present, but the future of this country. It is therefore imperative that the law must be applied to all who fall foul of it, without fear or favour.â€

But we were to be disappointed again when after several fits and starts, the prosecution on the charges laid by the Attorney-General only after OccupyGhanaâ€™s petition, was truncated and aborted by the same Attorney-Generalâ€™s nolle prosequi; and then Aisha Huang was deported without standing trial. The result is that Aisha Huang did not even pay the GHS12,000 in administrative fines for the petty immigration infractions she was originally charged with before our protest and the Attorney-Generalâ€™s intervention. We recall a petition from the Media Coalition Against Galamsey (MCAG) dated 21st December 2018, pointing out in real time that that decision was a mistake, and which fell on deaf ears.

It was sad that in the face of protests by the public over this action, a Presidential Staffer and the then secretary to the Inter-Ministerial Committee on Illegal Mining, Mr. Charles Bissue, in apparent answer to the MCAGâ€™s petition, added insult to injury in December 2018 by claiming that the Government deporting Aisha Huang was to prevent tax payer monies from being spent on her trial and possible imprisonment. What Mr. Bissue was unable to tell us was what that cost of prosecution and imprisonment would have been, compared to the damage that Aisha Huangâ€™s alleged activities had caused, and as compared with the Ghanaians and others who had been tried for, convicted of and punished for the same offence.

Then, as recently as April 2019, the Senior Minister Mr. Yaw Osafo-Maafo compounded the situation, justifying the lack of prosecution of Aisha Huang on the basis of Ghanaâ€™s relationship with China and the prospect of receiving $2bn under the Sinohydro bauxite project.

In our statement dated 22nd April 2019 in response, we were emphatic that â€œthe Senior Ministerâ€™s comments make complete mockery of the fight against Galamsey and critical decisions Government and the coalition against Galamsey have taken to address this issue. This statement suggests that there is a price tag for the exoneration of foreigners implicating in the appalling desecration of Ghanaâ€™s environment, rivers and laws. It positions foreigners who break/flout our laws as untouchable and above the law because their countries offer a trade partnership and benefits, we will receive from them.â€

Neither Mr. Bissue nor Mr. Osafo-Maafo has withdrawn and apologised for these offensive and insulting statements. That is why we think that the Governmentâ€™s alleged volte-face, captured in the Presidentâ€™s â€œmistake on hindsightâ€ statement gives no, little or very cold comfort.

We are unable to agree with the Presidentâ€™s claim that this would not happen again simply because the punishments provided in the law have been enhanced by a recent amendment. The decision to free Aisha Huang without trial had nothing to do with the state of the law or punishment regime at the time. It was simply an unfortunate political decision, the real reason being possibly what Mr. Osafo-Maafoâ€™s epiphany revealed. The amendment that the President refers to will not compel the Attorney-General to prosecute foreign nationals who are arrested for engaging in Galamsey or any other offence. Indeed, in July 2019 Huang Yanfeng, another Chinese national who was arrested in May 2019 for illegal timber operations, was also quietly deported, reminiscent of a pattern in dealing with foreign nationals who defy our laws regulating natural resources.

Thus, in our view, what the President should do is to assure Ghanaians that the executive power vested in him under the Constitution shall not be used in this manner again. And then we expect the President to order that all persons who have been arrested for being involved in Galamsey, especially the foreign nationals who are routinely simply handed over to Immigration for deportation instead of standing trial, should immediately be put before trial.

This â€œon hindsight mistakeâ€ has been a rather unfortunate, deflating and regrettable phase in the fight against Galamsey and a slap in the face of Ghanaians. We expect that all subsequent acts will match the realisation of the titanic mistake we made with Aisha Huang and more recently with Huang Yanfeng. We will judge the Government in this matter, not based in its words and assurances based on hindsight, but on its acts that are based on foresight. Let the Government beget fruits that befit the repentance of the â€œon hindsight mistake.â€.

Â Yours in the service of God and Country