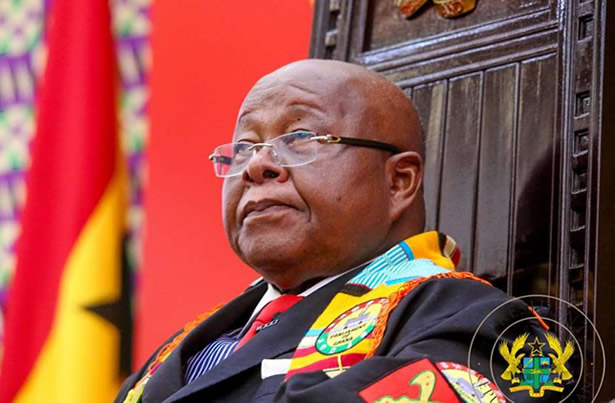 Prof. Mike Oquaye, the Speaker of Parliament has ordered all Ministers who are summoned before the House to write to them if they will be absent.

This comes on the back of the failure of the Minister for Fisheries, Elizabeth Afoley Quaye, to show in in the House without any notification causing the suspension of sitting for hours.

This prompted the speaker to order that Minister who is summoned to the House and can't make it must inform them.

“I am directing that, in the future, Ministers who know that they must move from place to place, time to time all in the course of official duty must ensure that, written communication of their absence must be made available to the Clerk of Parliament when such emergency and situations arise so that at least Parliament can advise itself and refix such questions accordingly.”

“It is good for the good order of events and also to show due regard to this honorable house. Mr. Clerk, we will make sure that this is appropriately conveyed to all ministries through the appropriate ministers,” he said.

On Thursday, October 24, 2019, after hours of sitting, the Speaker adjourned proceeding after the Fisheries Minister failed to show up and answer some questions asked by some Members of Parliament.

The House was informed by the Majority Leader of Parliament, Osei Kyei-Mensah Bonsu, that the sector Minister, Mrs. Elizabeth Afoley-Quaye was unavailable because she was out of the jurisdiction.

But the Speaker was dissatisfied with the fact that none of the two Deputy Ministers or the Chief Director was present to respond to the questions.

The questions which centred on the payment of contractors who executed contracts in restocking of selected dams, waiver of tax on aquaculture input materials and the construction of a fish landing site at Dzemeni were to be asked by Mr. Frank Annoh-Dompreh, Member of Parliament for Nsawam-Adoagyiri, and Mr. Rockson-Nelson Dafeamekpor, Member of Parliament for South Dayi.