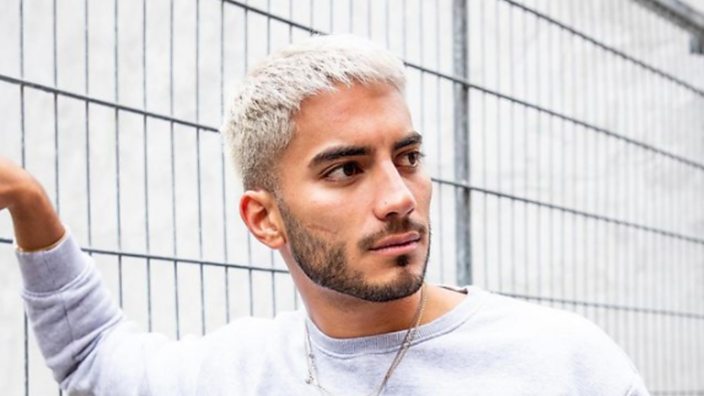 "When are you free to model?" the Instagram message read.

Juan, now 23, was at university at the time.

"I was so confused about it,â€ he says. Worried it might be some sort of scam, he looked into it and soon realised he had been scouted by the Chief Executive of Nemesis Models agency.

Series two of BBC Threeâ€™s documentary series, Models: Street To Catwalk, follows Juan and some other young hopefuls from tough neighbourhoods as they try to make it in the fashion industry.

"I went in for this induction day, to see if youâ€™re a fit for them, and they really liked me. I was so surprised I was potentially going to start modelling," he says.

Juan grew up in Colombia and moved to Manchester when he was 14, he had always dreamed of becoming a footballer â€“ modelling had never crossed his mind. But when he got behind the camera, that all changed.

"Gangs, knives and guns are all a part of life round here," Juan says. He realised modelling could transform his life.

"I love [modelling] because youâ€™re always meeting new people, and interacting with new models and photographers. So itâ€™s like you get the benefit out of the actual job, and then you get enjoyment out of meeting new people and making friends on set," he adds.

Shortly before he was due to be signed to Nemesis, Juan went on a night out with his friends.

Reflecting on that night, Juan tells BBC Three: "I thought I was going to die."

After leaving the club, Juan and his friends were followed and approached by two men who started squaring up to them. The incident was captured on CCTV footage.

"Then the rest of their friends arrived with balaclavas, bats and knives," he says.

"It was 12 of them and four of us, so I backed away. One guy was proper going for my face, and I was just trying to block out the knife motions. And then the other one came from behind.

"At that point I thought I could die. If Iâ€™d have fallen over I would have been vulnerable to all of them kicking my head in and stabbing me."

In the unprovoked attack, Juan was stabbed three times; on his face, the back of his neck and his ear - he needed surgery to sew it back on.

"The doctors were saying if the wound of my neck was a bit deeper I could have been paralysed."

Then came the realisation that heâ€™d been stabbed in the face and it was unlikely he would be able to model again.

'Trauma and constant nightmares'
After the attack, Juan didnâ€™t leave the house for five weeks.

"There was a lot of pain and my headspace wasnâ€™t right," he says.

Talking about his mental health, Juan says: "I was pretty depressed for a while and my self confidence went down a lotâ€¦ my usual happy self wasnâ€™t there any more."

All the hope Juan had for a career in modelling had gone. "I couldnâ€™t even look at myself in the mirror for a long time," he says.

"I was having constant nightmares, sweating and screaming in the middle of the nightâ€¦ I definitely have trauma from it."

Eventually Nemesis Models was able to get hold of Juan, and invited him in for a chat. This was the first time he left his house.

"When I went to talk to the agency they helped me out and supported me through when the scars were bare. They just reassured me it wouldnâ€™t be a problem."

Juan says the turning point for his mental health was when he was booked for his first shoot, for a start-up clothing brand.

'Embrace the way you look'

"I felt good because people were booking me, even though I had these scars. But I was also a little bit self conscious too â€“ thinking 'why have you booked me?'"

"Doing day-to-day life and getting jobs and doing shoots and distracting myself from all of it definitely helped me mentally, as I could get on with it and build up my confidence again."

But Juan still found it difficult to answer questions about where his scars were from. "Iâ€™d have to try and explain it to them without getting panic attacks."

One of the men that attacked Juan and his friends was convicted - the others were never found.

Now more time has passed, Juan has come to accept his scars.

"I think you should embrace the way that you look, and if youâ€™ve had an incident that changed your appearance just embrace it and just be yourself â€“ people arenâ€™t really going to be judgemental about it, like I thought."