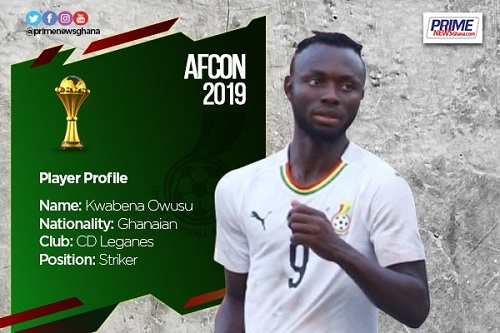 Kwabena Owusu (born 18 June 1997), is a Ghanaian professional footballer who plays for Spanish club Salamanca CF on loan from CD Leganés as a forward.

Owusu was born in Accra, and moved to Spain in 2016. After having trials at Racing de Santander and AD Alcorcón B, he joined CD Toledo on loan in August, being initially assigned to the reserves in Tercera División.

Owusu made his senior debut on 31 August 2016, coming on as a second-half substitute and scoring all of his team's goals in a 2–0 home win against UB Conquense, for the season's Copa del Rey.

He subsequently became a regular starter for the club, scoring eight goals as his side missed out promotion in the play-offs.

On 23 August 2017, Owusu signed a five-year deal with La Liga side CD Leganés. Eight days later, he was loaned to Real Oviedo in Segunda División, for one year.

Kwabena Owusu made his professional debut on 9 September 2017, replacing Carlos Hernández in a 1–1 away draw against Sporting de Gijón.

After eight league appearances, his loan was cut short and on 3 January,  he joined FC Cartagena on loan.

On 24 July 2018, Owusu was loaned to Salamanca CF still in the third division, for one year.

In May 2019, Kwabena Owusu was included in Ghana's 29-man provisional squad for the 2019 Africa Cup of Nations. On June 10, he was named in the final 23-man squad that will represent the Black Stars during AFCON 2019.