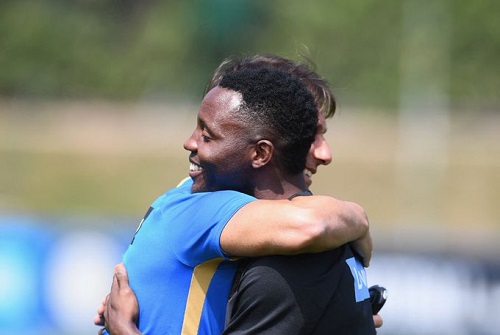 Inter Milan head coach Antonio Conte has advised his players on their performance in the bedroom, urging them to only have sex for short periods and use positions that will allow them to be "under their partners".

The Italian, who took over during the summer has advised his players including Ghana International Kawdzo Asamoah as they bid to break Juventus' Serie A title dominance.

"During the season, I advise my players to have sex for short periods and with the minimum of effort, and better use positions where they are under their partners and preferably, with their wives, because if with others, well, that needs extra action."

"That way they are not obliged to put in an exceptional performance."

Inter Milan over the weekend beat Torino 3-0 at the Stadio Olimpico di Torino. The Nerazzurri after 13 matches of the 2019-20 season, Inter have dropped just five points in Serie A and are hot on the heels of leaders Juventus trailing by just a point.

Meanwhile, former Black Stars defender Joe Addo has called on the technical handlers of the senior national team to fashion out a strategy to utilize the strengths of Inter Milan midfielder Kwadwo Asamoah.

Asamoah was not part of Kwesi Appiah's latest squad AFCON 2021 qualifiers. It was reported that tension existed between Asamoah and Appiah over position and role suitability in AFCON 2019.

“He is one of our best players and he is not a bench warmer.

“He is an everyday player both in the league and the Champions League.

“So he is somebody we have to accommodate in our national team because his experience will help these young lads go very far in the national team,” he recommended while speaking on The Tracker on Citi TV.