Arsenal fight back to beat Tottenham after Lamela scores rabona 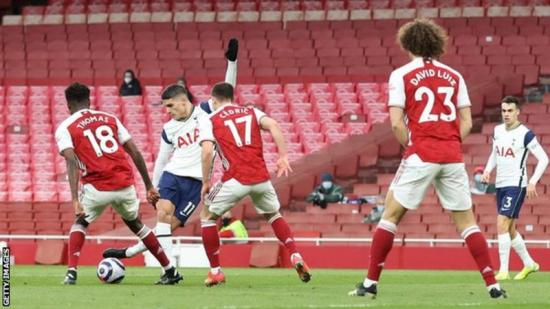 A first Premier League goal for Martin Odegaard and Alexandre Lacazette penalty saw Arsenal come from behind to beat 10-man Spurs in the north London derby.

Mikel Arteta’s side dominated much of the match, but fell behind to an outrageous goal from Erik Lamela, who was later shown a red card.

The Spurs substitute, who had replaced the injured Son Heung-Min early on, produced a brilliant rabona effort that curled into the bottom corner of Bernd Leno’s goal on 33 minutes. But Arsenal, who hit the woodwork twice in an excellent first-half display, deservedly equalised on the cusp of half-time when Odegaard's shot took a deflection to wrong-foot Hugo Lloris.

Arsenal continued to look the better side after the break, and the equaliser came from the spot when Davinson Sanchez fouled Lacazette and the Frenchman converted.

Spurs huffed and puffed and thought they’d equalised late on when Harry Kane’s header found the bottom corner, only for the offside flag to go up. And Kane, who was given very little service, went close again late on when his free-kick cannoned back off the post.

But chances were in short supply for Spurs all afternoon, particularly after Lamela, who had been flirting with bookings throughout the match, was shown a second yellow for an arm to the face of Kieran Tierney. And Arsenal held on for the win that their performance very much deserved.