Arsenal hammer Chelsea in US to leave Thomas Tuchel furious 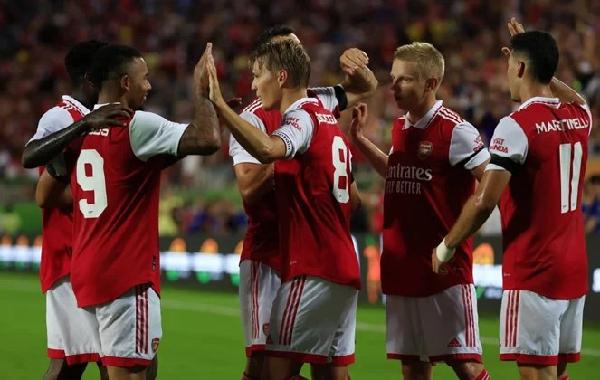 Gabriel Jesus continued his impressive pre-season form with another goal as Arsenal thrashed Chelsea 4-0 in a friendly in Florida on Saturday.

Jesus, who only joined Arsenal from Manchester City earlier this month, took his goal tally to four goals in three games for his new club in a clinical win for the Gunners in front of 63,811 fans at Orlando’s Camping World Stadium.

It was another encouraging performance for Mikel Arteta’s side, who took control of the game with two first half goals after dominating the opening 45 minutes.

Chelsea manager Thomas Tuchel could not hide his anger during a lacklustre first half display from his team, who were repeatedly exposed by Arsenal’s nimble counter-attacking.

Chelsea had one promising attack after five minutes when new signing Raheem Sterling played Timo Werner into space, but French defender William Saliba snuffed out the danger with a solid covering tackle.

Arsenal should have opened the scoring moments later, when Gabriel Martinelli burst clear on the counter.

The Brazilian passed to Bukayo Saka but the English international’s shot was saved by Chelsea goalkeeper Edouard Mendy.

The Arsenal pressure finally told in the 15th minute with a goal that came after Chelsea’s Nathaniel Chalobah surrendered possession with a misplaced pass that went straight to Granit Xhaka.

The Swiss international played a superb first time ball into Jesus who coolly chipped over the advancing Mendy to make it 1-0.

Martin Odegaard made it 2-0 to the Gunners in the 36th minute with another well-worked move.

Martinelli’s pass found the Norwegian playmaker in space inside the Chelsea area, and the attacking midfielder turned smoothly and tucked a low finish past Mendy.

Chelsea’s best chance of a lacklustre half came in stoppage time when Mason Mount curled a shot from the edge of the area which beat Aaron Ramsdale but crashed back off a post.

Arsenal extended their lead midway through the second half when Saka buried a rebound from close range after Mendy parried Xhaka’s long-range strike.

Arsenal continued to create chances but had to wait until injury time for their fourth goal when Albert Sambi Lokonga headed past Mendy after a superb cross from the right by Portuguese international Cedric.