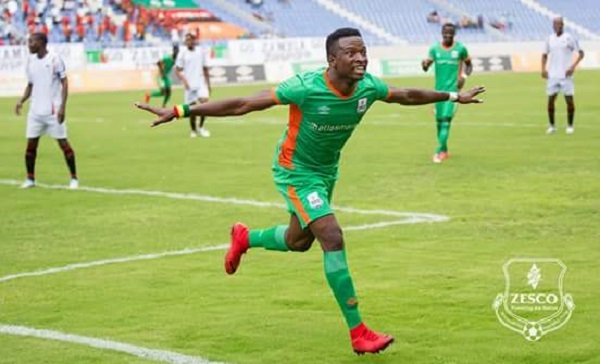 Over the weekend, Asante Kotoko lost narrowly to Al Hilal Omdurman in their opening Group C encounter in Sudan to end their impressive unbeaten run in the competition after Hamid Waleed Bekhat fetched the winning goal in the 40th-minute mark.

The Ndola-based club, on the other hand, started their 2018/2019 Total CAF Confederation Cup group stage campaign on a good note beating local rivals Nkana FC 2-0 at the Levy Mwanawasa Stadium on Sunday to go on top of Group C.

The Porcupine Warriors ‘en route’ to this prestigious continental jamboree surpassed 2 challenges in Kariobangi Sharks and Coton Sports of Garoua.

The report card of the preliminaries was somewhat impressive, scoring 7 and letting in 4 and the Ghanaian forward plying his trade in Zambia knows the threat Asante Kotoko pose playing at the Baba Yara stadium having known the strength of his former side Zesco United.

The 24-year-old forward came into the limelight after he scored 13 goals in 15 games to help Nchanga Rangers survive relegation after joining them half way through the 2017 season.

Asante Kotoko would be relishing their home games giving the fact that they have made Baba Yara stadium a fortress; the Reds have not lost there since 2015.