Atlético Madrid is not just a club, it's a family - Partey pens emotional letter to Spanish outfit 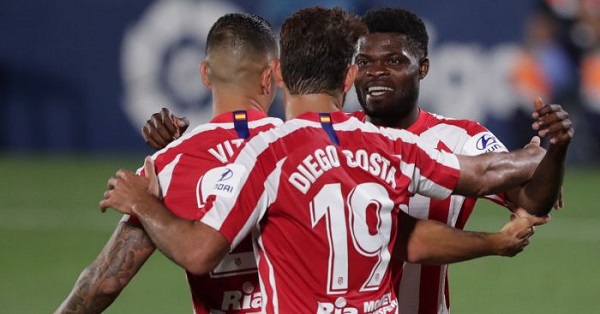 Thomas Partey has penned an emotional farewell to the Atletico Madrid for whom he has registered 188 appearances.

Nine years after joining the club Partey has parted ways the Spanish side to join Premier League club Arsenal.

However, the 27-year-old made some beautiful memories during his time with the club, and has penned an emotional letter to the club to show appreciation for the opportunity he was given.

"Dear Atletico fans, today I only have words of gratitude with you.  For several years now, Atlético de Madrid has been my home and a part of this family will always be with me.

I want to thank the club for the trust placed in me from day one, but above all, I want to thank you, this wonderful hobby that I accepted from the first moment and that has shown that it is both in good times and in bad times and you never truly stop believing.

Atlético de Madrid is not just a club, it is a family. Thank you"

Partey signed a long-term deal at the Emirates after he completed his medical and paperwork just before Monday's 11pm deadline.

He has been a key player in Diego Simeone's midfield since breaking into the first team from Atletico's academy in 2015.

Arsenal boss Mikel Arteta has expressed excitement after his outfit secured the capture of Ghanaian international.

"We have been watching Thomas for a while, so we're now delighted to add such a high quality player to our squad.

Partey, who has 29 international caps, will wear the No 18 shirt and will join up with his new team-mates next week after he returns from international duty with Ghana.