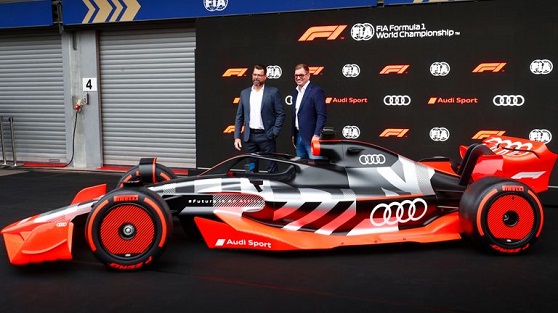 Markus Duesmann, chairman of the Audi board, said on Friday that the German car company had officially registered as a power-unit manufacturer in F1.

“If you think about Le Mans, DTM and Formula E, we have always been very active and very successful. We want to continue this success story in F1,” he said.

Audi has not said if it will run its own team or simply supply engines.

It said it would make further announcements before the end of the year.

Audi is expected to take over the Swiss-based Sauber team, which currently runs as Alfa Romeo.

And, following the Audi announcement, Alfa Romeo’s parent company Stellantis said that it would end its partnership with Sauber after the 2023 season.

Duesmann added Audi’s decision had been made because of new rules that feature an increased electrical component in engines and fully sustainable fuels.

F1 president Stefano Domenicali said: “This is a major moment for our sport that highlights the huge strength we have as a global platform that continues to grow.

“It is also a big recognition that our move to sustainably-fuelled hybrid engines in 2026 is a future solution for the automotive sector. We are all looking forward to seeing the Audi logo on the grid and will be hearing further details from them on their plans in due course.”

Duesmann said the increased proportion of power from the hybrid part of the engine matched with Audi’s decision to move towards being a fully electric manufacturer.

He added that F1’s budget cap, first introduced in 2021, “makes it very attractive” and that F1’s decision to go carbon neutral by 2030 was also key.

In 2026, F1 will continue with 1.6-litre turbo hybrid engines but will make significant changes from those used since 2014.

The hybrid element will supply more than 50% of the overall power, the complicated MGU-H – which recovers energy from the turbo – will be abandoned and sustainable, synthetic fuels will be used. These emit only the carbon taken out of the atmosphere to make them.

Another VW brand, Porsche, is also expected to enter F1 in 2026 as an engine partner to Red Bull.

Duesmann would not confirm that, but said that the two operations would be entirely separate, with Audi’s operation in Germany and Porsche’s in the UK if it entered.