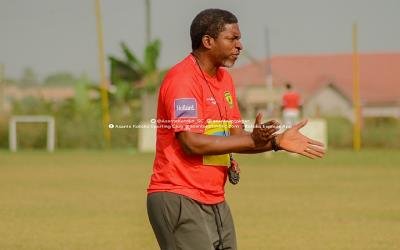 Asante Kotoko coach Maxwell Konadu says the shut down of the Baba Yara Sports Stadium for renovation works could derail their title chances.

Out of the 3 games, they won 1 and drawn twice and Maxwell Konadu said playing without the 12th man proved a little bit difficult for them.

According to him, after serving the Baba Yara Stadium ban and looking forward to seeing their supporters troop to the Stadium in their numbers and destabilise their opponents, then they were dealt a major with the Stadium closure.

The former Blacks Stars assistant coach indicated that he is disappointed with the Stadium closure and admitted the club'sÂ title ambitions have been dealt a major blow.

"We weren't happy when we heard the news but also renovating the infrastructure is a good call since it will benefit all of us in the long run."

"It's a bitter pill to swallow but we have accepted our fate and looking for a new venue.Â  The change of venue could derail our title chances but we can still win it."