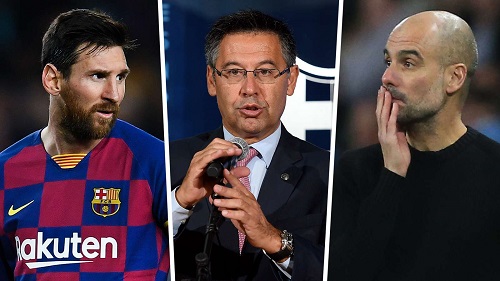 Messi and Gerard Pique were reportedly among those targeted in a series of social media messages, along with former Barca superstarsÂ Carles Puyol and Xavi Hernandez.

Victor Font, who is set to be a candidate in the 2021 presidential elections at Camp Nou,Â was also among those reported to be a target of abusive posts.

It is understood Font isÂ closely aligned with Xavi, who himself was heavily linked with a return to the club in a coaching capacity when Ernesto Valverde was sacked in January,Â Â

Bartomeu will not be seeking re-election, having been at the helm for the past six years, and Font is the only man to have stepped forward to succeed the 57-year-old ahead of next year's vote.

Barcelona have released an official statement on Monday addressing the report, which reads: "With regards to information published today about the contracting of a company dedicated to creating opinion on social media with a view to damaging the image of third parties related directly or indirectly with the club, FC BarcelonaÂ roundly deny any relationship, and furthermore, the contracting of services linked to social media accounts that have broadcast negative or disparaging messages related to any person, entity or organisation that may be, or have been, related to the club.Â

"I3 Ventures, a service provider to the club, has no relationship with the accounts mentioned and, if any relationship was to come to light, the club would immediately end their contractual agreement and bring about any necessary legal action to defend their interests.Â

"As such, FC Barcelona confirm that it has services contracted relating to the monitoring of social media with the aim of analysing both positive and negative messages about the organisation itself.Â

"With the contracting of these services, the club is attempting to look after and preserve its reputation as well those of people related to the club (sponsors, players, board members, members, supporters' club members), as far as the protection of this reputation is a fundamental element and responsibility for those who work for the organisation.Â

"The club demands an immediate rectification of the information published and reserves the right to exercise legal action against those who continue to implicate the club in such practices."

Barcelona have endured a turbulent start to 2020,Â with a public dispute between Messi and sporting director Eric AbidalÂ making the headlines in the weeks after Valverde's dismissal.

Quique Setien was the man who inherited the managerial reigns from Valverde, but the Blaugrana have since surrendered the initiative toÂ Real MadridÂ in this season's title race.