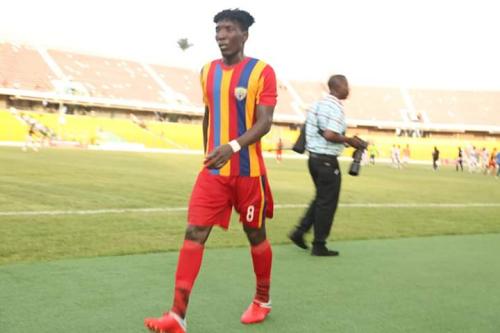 Benjamin Afutu has confirmed that he's entered negotiations with Hearts of Oak over extending his stay at the Accra based club.

The midfielder who joined the Phobians from Karela United in 2018 has a year left on his existing contract.

The 24-year-old, whose contract with the Continental Club Masters runs out next year has reiterated that he loves the club and enjoys playing for Edward Nii Odoom's side, whilst also revealing that he's entered negotiations to extend his contract.

Speaking to Accra Based Angel FM, Afutu disclosed that the club has come shown how much faith they have in him by coming forward with a new offer to tie him down.

Afutu was a key cog of the Hearts of Oak set up in the truncated 2019/20 Ghana Premier League.

He has revealed that he likes to partner with compatriot Frederick Ansah Botchway in midfielder as the latter, possess a host of qualities that includes not giving away the ball easily.

Relatedly, Hearts of Oak midfielder Emmanuel Nettey has shared that the players are itching to return to action with the Ghana Premier League scheduled to return in October.

According to Nettey, he and his teammates are waiting for the league to restart.

“What we are all praying for is for football to return so we can go back.

It’s been rumoured that the 2020/21 Ghana Premier League will have a new format. According to the reports, the 18-clubs will be divided into Northern and Southern Zone.

“No matter the format they are going to use all we are praying for is that football should just come back,” he told Citi Sports.

“What ever measures the FA have put in place for us we will embrace it,” he disclosed.