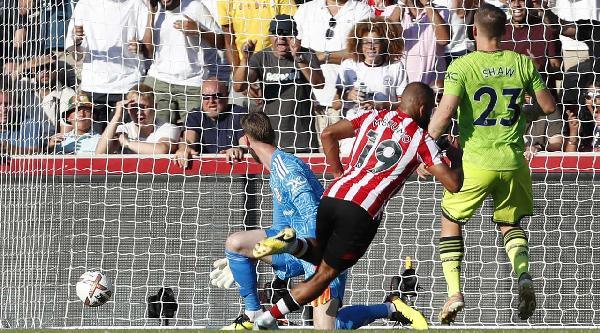 Manchester United have lost their first two games of a Premier League season for the first time in 30 years, as Brentford demolished the Red Devils at the Gtech Community Stadium.

The Bees scored four first-half goals as the visitors crumbled to a seventh consecutive away league defeat.

The debut of United’s striking new green kit was greeted with a performance to match by the visitors, who were absolutely miles off the pace as temperatures soared in the capital.

United’s goalkeeper bailed them out on many occasions last season, but his confidence looked shot after that howler, and he was culpable in Brentford’s second moments later. Christian Erisken was marked by Mathias Jensen, but de Gea picked him out anyway.

The Dane was dispossessed inside his own area, and Jensen finished with aplomb, cementing a dream start for the Bees.

Erik ten Hag could hardly believe what he was watching, as the visitors continued to capitulate in front of him. Brentford’s height advantage was evident from the start, and the hosts took full advantage on the half-hour to pull further ahead.

Ivan Toney was allowed to roam freely at the back post, nodding across goal for Ben Mee to prod home. Three down, United were now desperate for a route back into the game, but over-committed going forward and were badly punished on the counter.

Toney found space on the left, and picked a tremendous pass to find Bryan Mbeumo who shrugged off Luke Shaw to finish, completing a scarcely believable half of football.

United made a triad of substitutions at the break as they looked to salvage any shred of pride they had left after a chastening first half.

Though they could hardly have worsened, United began to offer a small threat, with Cristiano Ronaldo going close with a couple of headed efforts. The visitors’ threat tailed off though, as Brentford’s far superior work rate came to the fore to stave off any Red Devils attacks.

Only twice have United suffered heavier defeats in Premier League away games, laying bare the task that lay ahead of ten Hag, with the small matter of Liverpool to come in their next game.