Burnt cars and failed alliances: The inside story of how Kurt Okraku won the GFA elections 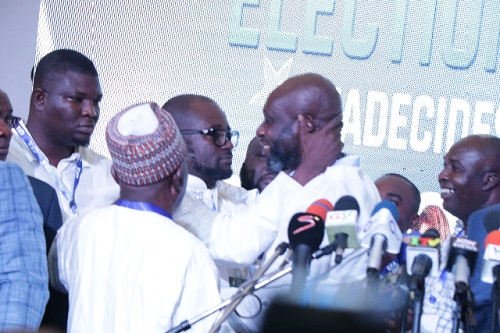 ‘Colleagues, as you walk up the stairs or the stage to vote for the man to take us to the promised land, always remember one name, Kurt Okraku’.

These were the last words of would be Ghana FA President, Kurt Okraku in a 1:58 seconds last message delivered to delegates assembled at the College of Physicians and Surgeons.

He had walked into the auditorium led by his Administrative Manager, Ameenu Shadow with a sweaty forehead. Glasses, with ‘diesel’ inscription on the left one tucked in covering his eye lashes.

Murmuring to Ameenu before stoping to redirect his eyes to the stage. For a moment he stood there, probably thinking, I could make history. My name could be part of the noble men to have led Ghana football by close of day.

Kurt earlier told Kwesè TV in an interview ‘I am best placed to become the GFA President.’ He was hopeful just as any other candidate, but ambivalent about what delegates have come to be known, courtesy of Sir John, ‘fear delegates’.

He had worked behind the scenes, travelled across the entire country, distributed #Umissable branded ball in a famous green and white colours and promised to make sure they get returns for investing in the game of football if voted into power. Thus, walking into the venue chosen by Elections Committee for the Ghana FA Presidential elections, Kurt Okraku knew he had equal opportunity of succeeding Kwesi Nyantakyi just like any other candidate who had the ‘word’ of delegates.

It was a contest beyond ideas. Those who had both cash, goodies and ideas stood a better chance. But there was one last opportunity for candidates to remind voters what the world knew.

‘I stand here today colleagues, with a very simple message’, Kurt Edwin Simeon Okraku bagan. “A message of hope, a message to lead and to repair our dear football fraternity and take it to the promised land – the Ghana Football Association is at its all time crossroads and we need a pragmatic leader.’

‘A leader with feasible policies, a leader with a good record of transporting or transforming our local products to be the target of envy. A leader that will ensure that our football industry embraces all the good principles of corporate governance.

A leader that would ensure that we are able to change the bad perception that has completely shattered our desired product.’

Mr. Okraku believed he was the one. He nursed the ambition to lead the football governing body in April 2017 when it was becoming increasingly clear Kwesi Nyantakyi would likely drop his tools as head of the association.

He worked towards it, but George Afriyie, the former Vice President of the FA was a man on his way. The man many people thought was ordained to succeed the then Wa All Stars owner before an infamous message describing Kwesi as ‘wicked and greedy’ ended his dream of ascending to the throne he was close to but far from.

The ambitions of aspirants, apart from George Afriyie and Nana Yaw Amponsah, were not known publicly, but some section of the media knew.

Others would show their faces after the exposé brought the reigns of Kwesi to its knees. Wilfred Osei Kwaku and Kurt Edwin Simeon Okraku had promised never to contest Kwesi for the throne, but in his absence, an equal playing field was created for all interested candidates.

In mid September 2018, three months after the exposé, Wilfred Osei Kwaku planned a press conference to announce his intentions to contest for the vacant seat. The venue was Kems Hotel at Mateheko, Flamengo. The date, September 15, 2018, just two days after FIFA set up a Normalisation Committee to replace the then Executive Committee. It was called off for reasons unknown, sources say. 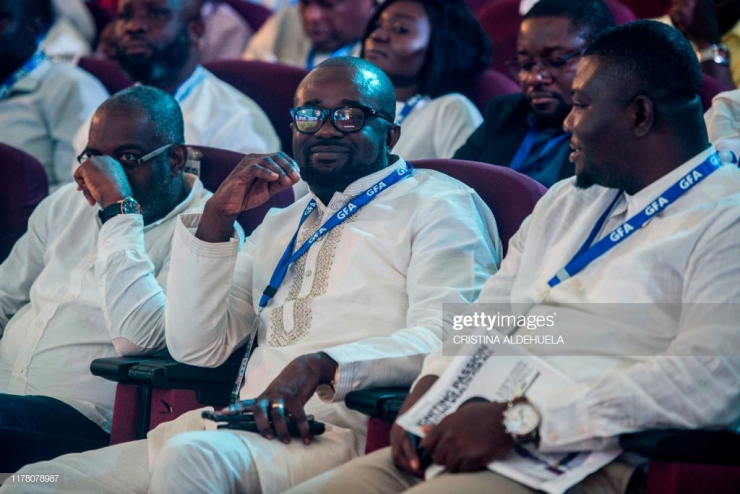 In February 2019, to be precise, within the first week of February, the camp of George Afriyie was told Palmer, as Wilfred Osei Kwaku is affectionately called, merged with Kurt Okraku for the Presidency.

The idea was harboured but, it never materialised. It was at the 70th birthday of Lepowura MND Jawula, known as the God father of Kurt, sources say, it was harboured.

There were two proposals: Okraku will be made Vice President if Palmer wins or Kurt occupies the position of Secretary General if same result is secured.

When these two proposals failed, George Afriyie got himself into the picture and in July-August, they had an honest conversation. Frank one you would expect of investors of the game. The then Dreams FC Executive Chairman looked at George Afriyie in the eye and told him, ‘step down for me’.

Sources had earlier indicated that the former Ghana FA Vice President tried a negotiation to make Kurt his Vice President and he rejected with a subtle rebuke; ‘you and I who deserves to be GFA President?’

When all attempts failed, they all went into the contest, lobbying powers that be, promising gold and diamond, and sharing what they had.

On the day of the elections, in the words of George in an interview with Kwesè TV, he had 80 votes. Nana Yaw Amponsah was expecting 76 votes. For Kurt Okraku, his numbers were never stable, his numbers were 2 short of 60.

The first round would throw out all expectations through the window. Kurt took a lead he would not relinquish. It was only 4 votes between him and George. Nana Yaw, whom many believed was the dark horse in the race had 27 votes, gaining 6 votes the night before the elections. Many delegates had promised him, but were unwilling to cast their ballots for him for reasons unknown. There were those who played the card, ‘his time is not due yet’. 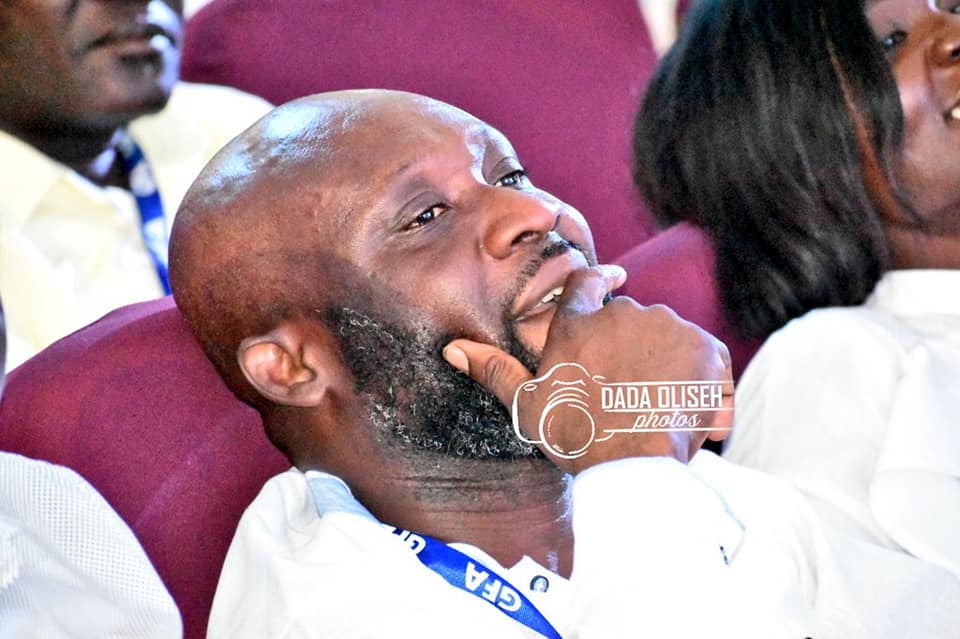 He was the man to determine the next leader of the FA, but he would not give up, he went for it for the second round but before that, he lost even his loyal votes.

Team Kurt established a great control of the delegates. They whispered into ears when they had to. Randy Abbey looked Nana Yaw in the eye and had a discussion only those close to the two can tell.

They went for a second round and the impact of the work-rate of Team Game Changer could be felt as he stretched the gap by 16 votes. Further steps were required to win this.

A gentleman, in the camp of Nana Yaw Amponsah, a loyalist of the vision of Mr Amponsah, betrayed him and went into a negotiation with another candidate.

He said; ‘Make sure you find something for the boys. You’ll see the impact after the voting’.

The night before, a key person in his camp leaked a vital information, getting his opponents to intrude them in their eleventh hour campaigning. Those who were in his camp, but happy to switch or share information to others, killed a dream. He was out of the third round, but George who garnered 43 votes, seated in second row horizontal and third vertical at the auditorium and was still in it, took his phone and placed a call through to Ransford Abbey.

He was visibly distressed, pondering over what to do next. At that point, probably, Randy came to mind and he called him on phone for maybe, an advice.

Randy on the other hand had just finished a tête-à-tête with Kurt. He sat with an animated face, hopeful. When he turned to his right, George gestured to him that he was calling him on phone.

He picked up, whatever they discussed remained private, but I hazard that was the turning point.

The Okyeman Planners President stepped out of his seat, took to the right door, for a short meeting with key members of his team before returning with the vital message.

‘In the interest of football, I concede defeat and I congratulate my brother.’ It was a long journey, a journey that ended tearfully and otherwise.

For Mr. Afriyie, it was double agony as his car, 2017 VX or V8 was burnt to ashes in one of his campaign trips. Those on board came out unhurt. To lose his car and the elections, was a double blow for the man who earned the name ‘Chief of Staff’ during the memorable days with the former FIFA Council member.