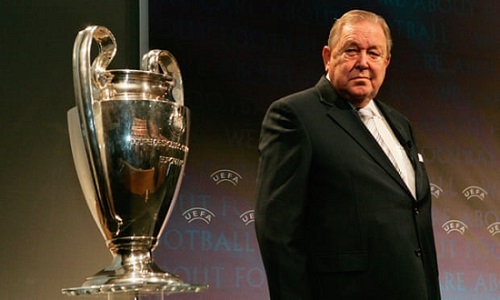 Lennart Johansson, who oversaw the introduction of the Champions League during a 17-year reign as president of European football’s governing body, has died at age 89.

The Swedish Football Association said the former Uefa president died on Tuesday after a short illness.

“Lennart Johansson was our biggest international football leader of all time, no Swedish has had a similar influence on football in the world,” the Swedish FA’s president, Karl-Erik Nilsson, said on Wednesday. “He was deeply respected as Uefa president and vice president of Fifa, his leadership has aroused admiration worldwide.”

The Fifa president, Gianni Infantino, led the tributes to Johansson. “I am heartbroken by the news of the passing away of Lennart Johansson,” Infantino said, in a statement on the Fifa website.

“He was a friend and an invaluable source of wisdom and inspiration. I will be forever grateful for having had him as the president of Uefa when I joined the organisation in 2000. Since then, Lennart has always been a role model of professionalism and, more importantly, of humanity.”

Johansson was elected to lead Uefa from 1990 to 2007 when he was beaten in the presidential election by Michel Platini. Johansson also served as vice president of Fifa but lost a divisive contest for the presidency to Sepp Blatter in 1998. Blatter rejected allegations of vote-buying, and the two never saw eye to eye after that.

Johansson said creating the Champions League to replace the European Cup was his proudest achievement at Uefa. It evolved into club football’s most lucrative and prestigious competition, with expansion that saw non-domestic champions given the entry.

Johansson had an award inscribed: “To Lennart Johansson, the father of the Champions League” in an office he kept at Sweden’s national stadium in Stockholm.

“It’s the biggest tournament we have in football for clubs, watched all over the world. We send it to about 200 countries and if you listen to the players about their wish for the future, it’s ‘I would love to be in the final of the Champions League,’” he said in a 2010 interview with The Associated Press.

Uefa was also transformed under Johansson’s rule, from an administrative body into a commercial enterprise managing Europe’s top club and national team competitions. Its headquarters moved from a suburb of the Swiss capital, Bern, to a waterfront facility in Nyon, by Lake Geneva. Johansson was named honorary president of Uefa after losing the presidency to Platini in 2007.