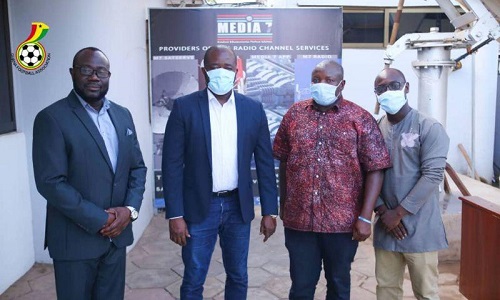 The deal, makes Media 7 network, the official broadcast partner and exclusive content producer for all products of the Greater Accra Regional Football Association. They will produce live matches from selected game centres during the Juvenile League, second and third Division Leagues and the Women’s First Division League.

“I take this opportunity to confirm that Media 7 has signed an MOU with the Greater Accra Regional Football Association on the Juvenile football and also rotational League amongst others,” Dr. Kuuku Biney, CEO and Founder, Media 7 Group of companies told the GFA Media team.

“We did this not for selfish gains but to bring the football fraternity in our country to where it is supposed to be. We are looking at juvenile football to make sure we expose it so you really enjoy the God-given talents in this particular area of sport in our country.

“We also signed that there will be a rotational League so that the teams will be able to have the experience of multimedia. One of the objectives for our MOU is that because we have something that is good, the good book says that you can’t light a candle and put it under the table, it has to come up. And so because we have something that is good, we need good media power to expose it to the world and that’s what we have done.”

Dr. Kuuku Biney further stated that Media 7 Network will continue to work with the GFA to extend the deal to the other regions.

“We will knock on the door of the GFA so that the other regions also will sign up and also propose to the GFA that content consumption is key in this area. What we can do to also assist is that we bring our natural resources and our professional media resources to really project any kind of content idea that GFA has… We will be able to bring our latest state of the art equipment, i.e. OB Vans and our media professional crew to really cover the content ideas of the GFA.

“We know that GFA at the moment is really a proponent for grassroots football to come to the limelight and that strikes the course of our tenets. We will also ensure that we go down there and expose the talents that are there,” Dr. Biney added.