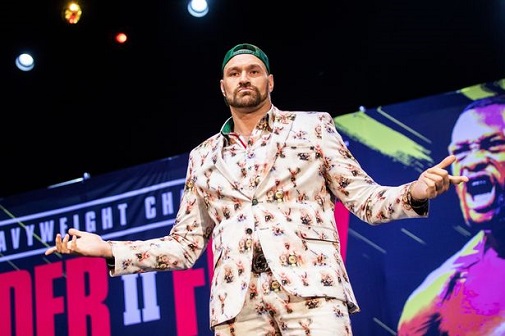 Tyson Fury has admitted to a somewhat unusual addition to his training routine ahead of his huge upcoming fight againstÂ Deontay Wilder.

The Gypsy King and The Bronze Bomber will face off for the second time in Las Vegas on February 22 in what is being described as one of the biggest heavyweight fights in the history of the sport.

Fury is already in the USA preparing for the bout, and said he has been having some alone time to help him in his training.

Speaking to the media ahead of the fight he said: "I'm doing a lot of things I didn't before. I'm eating five or six meals a day, drinking eight litres of water. If it's gonna give me an edge, I'm willing to try it.

It remains to be seen whether this extra leisure activity will aid Fury in any way, but the 31-year-old added that he was looking for a knockout in the fight after he controversially drew with Wilder on points in 2018.

"I know I will not get a decision in the US," he continued. "They had to rob a man who had been out of the ring for three years and they still couldn't beat him. I'm not coming here for a points decision, I've had too many of them- nine of them.

"I'm coming here for a knockout, I've had 21 of them and from the heart that's what I'm looking to do. This is why I employed Sugar Hill. If I didn't want a knockout, I wouldn't have hired a Kronk trainer.

"If I didn't want a knockout, I'd have kept Ben Davison and working on that herky-jerky style."

Wilder, however, is confident of victory,Â and said he was ready to 'rip Fury's head off'.